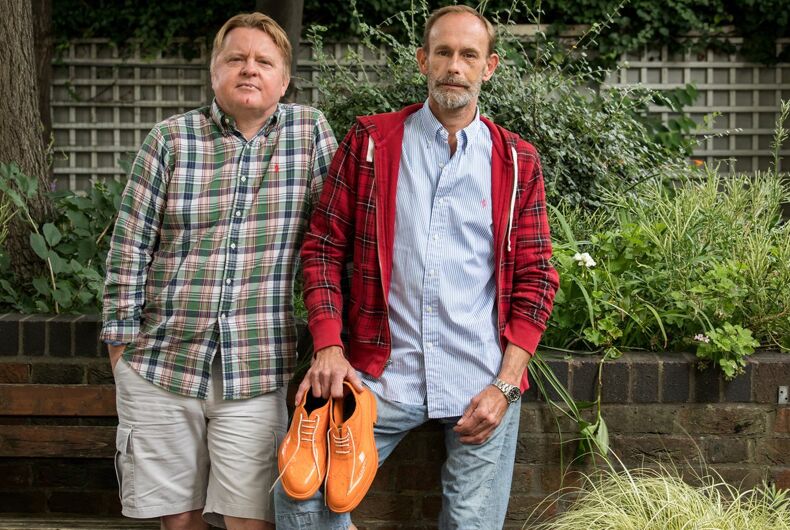 A gay couple says they were beaten last Sunday by a group of men in their 20’s.

Julian Smith, a lawyer, and Andrew Leonard, a decorator, were walking to their apartment in London on Sunday night. As they approached their building’s parking lot, they say they heard “barking noises.” “We were reticent as we got in,” Smith told the Evening Standard.

He said that they found a group of young men drinking in the park. The couple was called “poofs” and one of the assailants shouted, “Fucking hell, what are you wearing?” referring to Smith’s bright orange shoes.

Smith tried to reason with the young people. “I told them, we’re a couple of middle aged gay guys, it’s not a very brave thing to try and intimidate us.”

“They weren’t kids, they were in their mid-twenties. I think that encouraged us to try and reason with them a bit more.”

One of the young people then took off Smith’s glasses and punched him in the face.

“They kicked Andrew like a kick-boxer straight in the face,” Smith said. “He was on the floor and out of it.”

“I’m trying to protect Andrew and they are circling around like hyenas. They were vicious little shits. We could have had a fatality quite easily.”

“I’ve got a really mashed lip, it’s not just cut it is pulverized, it’s like jelly. I might have to have some cosmetic work if I can afford it.”

Neighbors intervened and called the police.

Leonard lost four teeth and has a broken cheek bone and nose.

A spokesperson for the police said that the crime is being investigated as a hate crime, but that no arrests have been made.

Newsweek’s brutal cover will piss off Trump, but the internet loves it

#ObamaDay: Twitter shares all the reasons they miss Barack Obama on his birthday