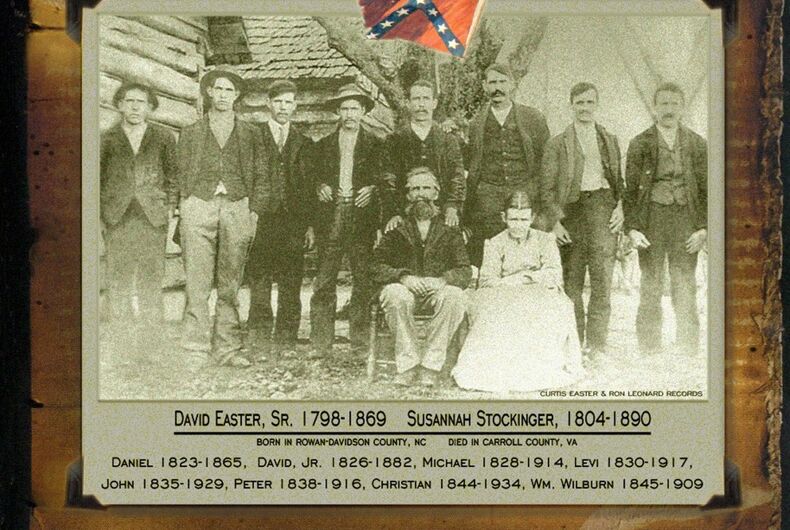 A graphic created by distant relatives, depicting my fifth-great-grandfather David Easter with all eight of his sons, among which two, Levi and Michael, are also my third- and fourth-great-grandfathers. Each of the brothers served in the Confederate Army.Photo: Matt Comer

The people of Durham removed their Confederate monument last night. I stand in support, so it seems fitting to share this commentary from a couple years ago with my fellow white people again.

For many of us — white people born and raised in the South and descended from southern families with long histories in this land — recent conversations resulting from Dylann Roof’s act of fatally racist terrorism in Charleston have been difficult. Specifically, given Roof’s self-admitted affinity for the Confederacy and its symbols, much debate has turned to the Confederate battle flag, other Confederate symbols and the history and meaning of the southern rebellion. The debate has provoked quick responses of defense or middling excuse-making from people like us.

I understand this response. In the past, I’ve had the similar kinds of responses. I know the debates seem personal, eliciting feelings we’re perhaps not used to addressing and causing us to confront emotions and certain uncomfortable facts about our families we’re not accustomed to having questioned.

And, maybe, other people don’t understand why it’s so emotional. Why something that happened so long ago could seem so personal. “The Civil War ended 150 years ago,” you’ll hear others exclaim. “Get over it, already,” they’ll add.

But, still, you have difficulty setting aside personal biases and confronting the truth.

You see, us white southerners, we’re special. If your family is anything like mine, and odds are many of yours are, it goes a little something like this:

You’re born into a big family, with a long history in the South. Your elders — grandparents or great-grandparents or aunts or uncles — fill family reunions and holidays with stories of family members long gone. Family history and genealogy are forefront. Legends and folk stories of family members are passed down from generation to generation. You might be able to trace at least one line of your family prior to the Revolution and at least one ancestor served in the Continental Army. Military service in your family continued into the next century, and one of your forefathers, if not more than one, fought for the Confederacy. You know where they’re buried. You’ve seen their Confederate tombstone. Heck, someone in your family might have even arranged to have a formal Confederate tombstone commissioned by the U.S. Department of Veterans Affairs (yes, they still do this).

You’ve been taught your entire life to be proud of your family heritage and history. “Heritage not hate” is more than a Facebook meme; you’ve heard it all your life. All those folk stories and legends told you that your great-grandparents were heroes — gallant knights who rode off to war to defend their families and their homes against an angry invading force during the great “War Between the States.” You grew up whistling “Dixie,” damning Sherman’s March to the Sea and all the great troubles caused by the “War of Northern Aggression,” commemorated in songs like “The Night They Drove Ol’ Dixie Down.” You defended the Confederate battle flag and maybe even flew it in your youth.

And, because of this history and your youth and your family and because of all the times you’ve studied your genealogy and read your forefathers’ names and wills and letters and visited their graves, you begin to see yourself in them. You begin to think you know them. That they have some sort of real impact on your life today, as if they’re here with you now.

Then someone comes along and calls them white supremacists, racists, rebels and traitors. Then a tragedy happens and people lose their lives and others compare this terrorist to your ancestors.

And you shut down. Because that’s not the kind of story you heard growing up. That’s not the vision of the valiant hero of the “Lost Cause” you thought you knew. That’s not the “accurate” portrayal of men who simply sought to protect their families, keep them fed and keep them safe, you tell yourself.

But — as hard as it is to hear it, as much as no one wants to see their family heritage turned over into a collective history of hate, treason and violence — every bit of this criticism is true.

Not only is it true, it’s criticism we must embrace. We must throw off our Lost Cause-colored glasses and see our histories for what they are. We must acknowledge and admit the realities of the pain, suffering, death and despair it caused millions of human souls.

My family is not immune. My seventh-great-grandfather Thomas Comer owned more than a dozen slaves at the time of his death in 1793 or 1794 in Halifax County, Va. I share a common ancestor with a second branch of the same family that would eventually produce Braxton Bragg Comer, the Progressive-era governor of Alabama from 1907-1911 and a U.S. senator who supported rabidly racist Redeemer Democrats, exploited black labor in the convict lease system and was connected to some 25 deaths of black convicts working for his economic self-interests. My fifth-great-grandfather in another line of the family produced eight sons — each serving for the Virginia infantry during the Civil War. One died in a Union prison camp, and the other seven, according to family lore documented in an old newspaper, “heard the last gun of the war, were nearly starved at the surrender at Appomattox, heard Lee’s farewell address, turned their faces to their loved Dixie and started their steps homeward.”

This is the truth. An ugly, uncomfortable one, but truth nonetheless. And if we ever have any hope of moving this nation toward racial reconciliation, white people like me, like you and like so many others will have to acknowledge this past. We’ll have to stop whitewashing reality. We’ll have to quit treating traitors and white supremacists as heroes, even if they’re among our own family trees. We’ll have to look deeply inward and ask ourselves tough questions.

My answer is a resounding no.

Because we have a choice and though we cannot change history, other choices are before us:

We can cast off old family heroes and choose them anew — heroes like my grandfather, who decried the evils of the Ku Klux Klan instead of encouraging their violence like B.B. Comer is once thought to have done. A hero who had a sense of shame and regret when telling me about distant cousins who were, even nearly 150 years after the end of the Civil War, still members of the Ku Klux Klan. A hero who, when integration became the law of the land, taught his daughters to treat all their fellow classmates with respect and began to challenge his own views, remaining loyal lifelong to a Democratic Party increasingly more tolerant, more equal, more steadfastly and firmly committed to the ideals of equality and justice for all.

Additionally, we can choose to take our “Lost Cause” mythology, celebrations of hate and slavery and symbols of treason and violence like the Confederate battle flag and relegate them to history, not the present. Put them in museums. Put them in your family’s historical files. Move Confederate monuments to cemeteries.

But, most importantly, we can choose to turn to our black neighbors and friends — many of them descendants of the very people our families once owned and fought to keep in chains. We can choose to hear their words, their stories, their emotions and feelings and all the things we’ve failed to hear over decades and centuries of making sure we were the ones who had singular, ultimate, God-like control over their lives and minds.

This choice is ours and ours alone. This responsibility lies with us, because people like us — people whose blood flows through our very veins — first set up these systems of slavery, disenfranchisement, convict leasing and other institutional ills under which others have suffered and we have benefited. We’ll have to make this choice and work hand-in-hand with the people our forefathers once sought to silence. Together, we’ll ensure the mistakes our ancestors made are never repeated. Together, we’ll put America on the path upon which we first started when other heroes — people like my seventh-great-grandfather, Michael Easter II, and perhaps someone else in your family — took up their duty to fight for a nation founded on the self-evident truth that all men, including ultimately black men and women and everyone in between, are created equal.