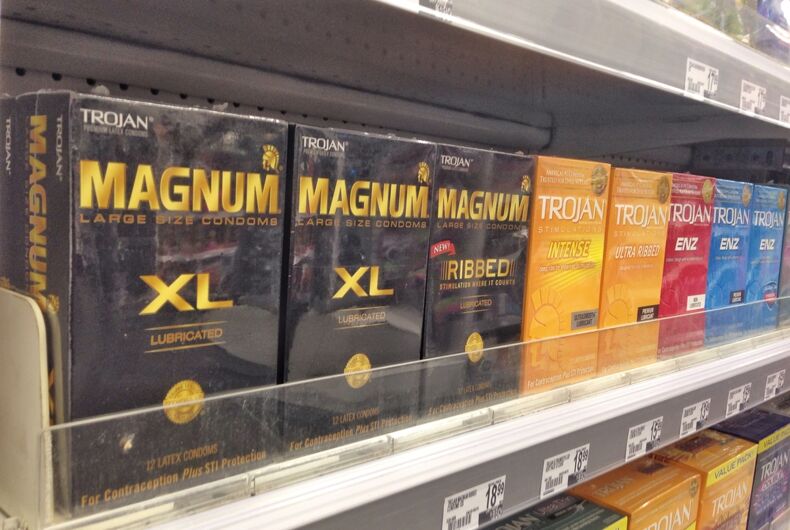 A gay anthropologist in Britain has started a one man mission to get the “family planning” aisle renamed in drug stores. In a world gone mad, Jamie Lawson is standing up for those who can’t procreate and he’s taking his case to corporate headquarters.

Lawson, a gay man, stopped by a local Sainsbury supermarket last June and wanted to pick up some condoms and lube along with his groceries. But when he found the items under a “family planning” banner, he took his complaint to Twitter.

“I am a gay man; the sex I have is non-reproductive by definition,” Lawson told Mic, saying the phrasing made him “self-conscious in a way that heterosexual people [aren’t].”

Hey @sainsburys can we talk about how unfit for purpose and excluding this signage is? pic.twitter.com/3zFx9kYdFn

Months later, Lawson has contacted and compared several chains’ choice of words for the sexual health section. Our friends over at Queerty have a good rundown of the back and forth between the activist and various outlets, but what about American drugstores?

A brand manager explained to Mic that in the public’s mind the terms “sexual health” and “family planning” are often one and the same, but “sexual health” makes some people uncomfortable. They want to “get in and get out” quickly. They put the sections in the back of the store to make people more comfortable since it’s more private.

But does that make a drugstore shelf designated for “family planning” homophobic?

“There are quite a few of us for whom sex has nothing to do with reproduction at all,” Lawson wrote in a blog post. “I’m a man who has sex with men, for example. No man that I’ve ever had sex with has been capable of becoming pregnant (which is not to say none are), so ‘family planning’ has been pretty low on my list of priorities when I’m thinking about orgasms. LGBTQI+ people of various types and combinations tend, on the whole, to have sex for pleasure, rather than reproduction and, furthermore, when queer people do decide to reproduce, we probably don’t go shopping for condoms.

“In fact, if you really start to look at it, if you follow that idea all the way down this particular rabbit hole, then it starts to look as if the fact that LGBTQI+ people have sex for pleasure is what it is about us that society (people en masse) really objects to.”