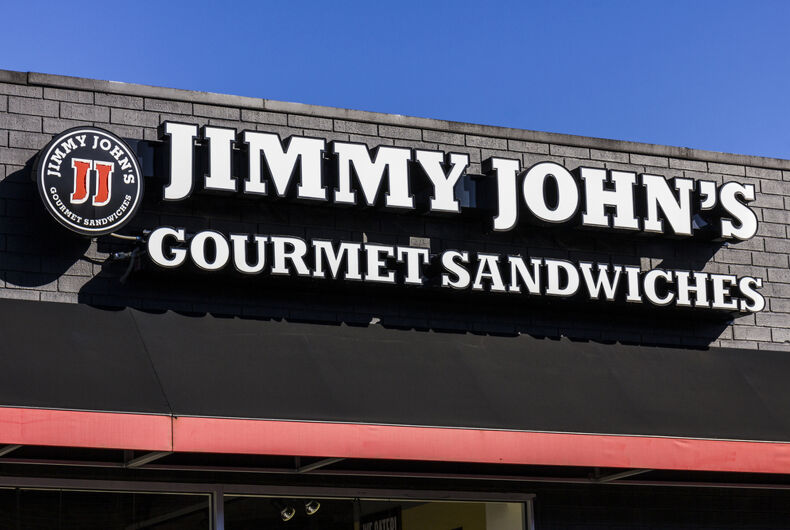 A young man in Asheville, North Carolina, was shocked to discover an antigay slur written on his sandwich wrapper at a local Jimmy John’s restaurant when he arrived to pick up his order. Now Roy Philbrick, a regular customer of the establishment, is fighting back and he has the help of a determined group of youths helping him.

Philbrick says he normally orders his sandwiches online under the silly name “gayest of gay.” Like many establishments that request a name for food orders, customers are not required to give their actual names.

“I’m fine with my sexuality, and I’m pretty out there, so I didn’t think there would be an issue,” Philbrick told the local ABC affiliate. “They always put “gg” or whatever the sandwich is, they never actually put what I put.”

This time, however, the manager wrote an antigay slur on the wrapper instead of the usual moniker. While “gayest of the gay” was the name on the receipt, it wasn’t the one written on the sandwich.

Philbrick’s partner, Bastian Duran, says he called the location after seeing the wrapper. He says the manager confessed to writing the slur on the wrapper.

“I explained to her it was offensive, that was the main thing, and I kept repeating myself because she kept saying she was sorry and that she understood,” Duran said. “She explained that she was the one who wrote it.”

“And her response to that was, well I wrote it, and I was going to re-wrap it, but I thought it was too funny so I didn’t.”

The owner of the franchise has a different story, saying it was an “accident.”

“They changed [their story] about three or four times,” Duran said. “We’re not stupid, sorry.”

Philbrick, Duran, and their local youth group protested outside of the store on Thursday, demanding that the franchise fire the employee responsible and give staff sensitivity training on LGBT issues. After the protest, Philbrick says the sandwich chain’s corporate office reached out to “make things right.”

There are quite a few reasons why Jimmy John’s is a bad corporation beyond this one antigay incident. The chain’s founder is a notorious right winger who bombastically opposed giving his employees health coverage under Obamacare, supported disgraced anti-immigrant Arizona Sheriff Joe Arpaio, fired employees who were trying to unionize, and he is an avid big game hunter who has posed for pictures with the dead bodies of elephants and leopards he has killed.