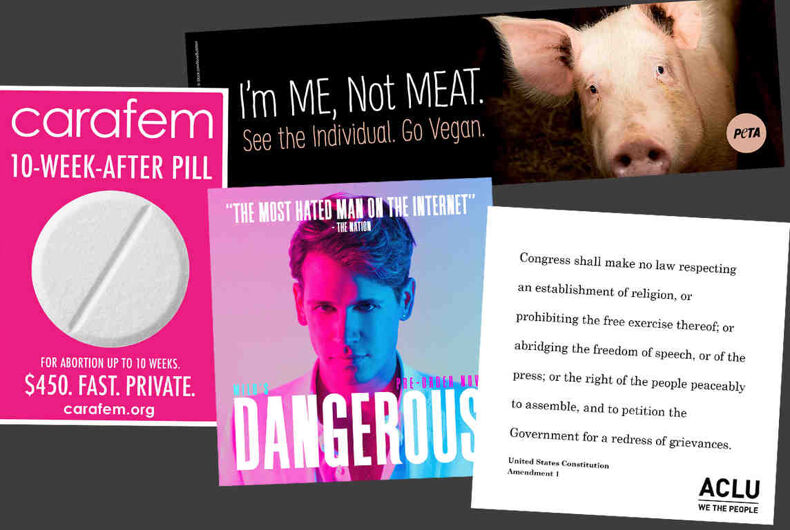 The ACLU is suing the Washington Metropolitan Area Transit Authority (WMATA) after it rejected several ads, including an ad for gay alt-right provocateur Milo Yiannopoulos’s book.

WMATA has a policy of rejecting controversial or political ads, which it used to nix ads from the ACLU, Milo Yiannopoulos, PETA, and Carafem, a group of reproductive health clinics in DC and Atlanta. ACLU argues that this violates the First Amendment, since WMATA is a government entity governed by representatives of Maryland, Virginia, DC, and the federal government.

“The First Amendment protects the speech of everyone from discriminatory government censorship, whether you agree with the message or not,” the ACLU’s Arthur Spitzer said.

Here’s the ACLU’s ad, which is just the text of the First Amendment. Some versions of the ad are in Spanish and Arabic.

It’s hard to see how text that every 7th grade civics student has to read is too controversial for people who live in the nation’s capital, unless the problem is that the text appeared in languages that hundreds of millions of people speak.

This is the ad for Milo’s book, which the ACLU says contains no opinion other than “buy this book.”

The other ads were all rejected before being posted, but this one was pulled 10 days later because of rider complaints.

This ad from PETA was rejected. The ACLU argues that this is an example of viewpoint discrimination; ads for meat and leather are routinely displayed in DC public transportation, but an ad opposed to buying those products was rejected.

Last, this ad from Carafem was rejected. Like many ads displayed in the Metro, this one is advertising legal services. It’s only political if you read politics onto it, which you could do for any ad out there.

The Carafem ad is particularly troubling, since it has information that some people might not otherwise see. If we lived in a sane country, something like this would be a public service announcement.

WMATA has not commented on this lawsuit. My guess is that their policy is in place to make the space appear neutral. The problem is that no idea is neutral, it’s just that some are accepted by more (and more powerful) people, and people who lack self-awareness assume that their ideas are neutral and shared by almost everyone.

Yet the First Amendment is there particularly for speech that people find offensive.

Deciding what’s controversial is, well, controversial. One person might see an innocuous clothing ad, and another might see a photoshopped image of a woman’s body presented for public consumption. Where one person sees a banal ad for a clinic’s services, someone else sees an ad for the murder of unborn babies. A censor might see an ad for a certain church as quaint, whereas I see queer children indoctrinated in self-hatred for the first 18 years of their lives as horrific.

If Metro riders really want a subway system where they aren’t bombarded with ads they find offensive, they should ban all ads and make up for the lost revenue with tax dollars. I’m sure WMATA could find something more beautiful to put in their place.