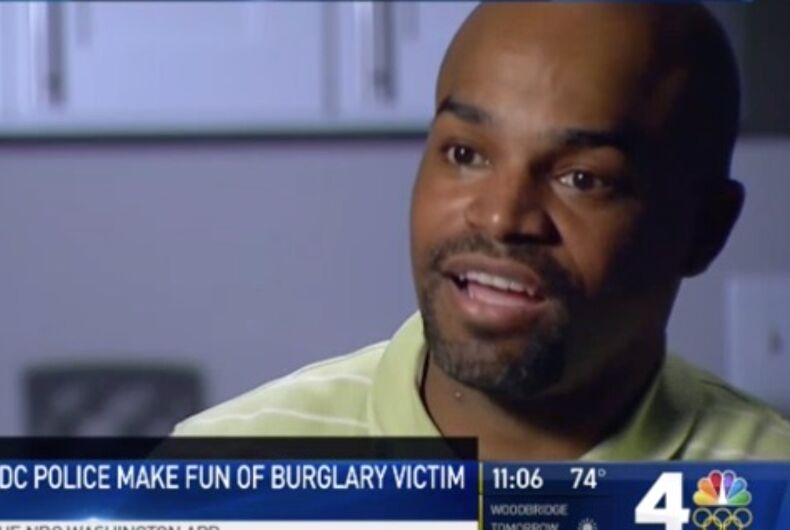 A burglary victim’s home security camera didn’t just capture the home intruder entering his house, it also caught two DC police officers behaving badly. While the two were investigating the crime, they made crude jokes about his sexuality and making light of the crime.

Clarence Williams was out of town when his alarm service called him to report an intruder. “I was appalled. I was frantic because I was out of the country,” he told DC’s NBC station.

But when officers responded, they only knocked on the front door. When no one answered, they left without checking the back door. It wasn’t until 8 hours later  – after a neighbor called the police when they noticed the back door was destroyed – that officers actually checked the home.

“They made a comment to my neighbor, saying, ‘Well what do you expect. You live in Southeast,'” Williams said. The southeast side of DC is a predominantly black area of town.

But when Williams got home and checked his security camera, he was shocked to find video of officers speculating about his sexuality and dancing.

“Armani, Dolce and Gabbana… He’s probably gay,” one of the officers can be heard saying before the other one starts to bust out some moves as if in a gay nightclub.

“We’ve got police out here, dancing in my home and acting as if this is a joke and this is serious. This is my life,” Williams told the station.

A police spokesperson says they are investigating the complaint and the two officers have been placed on a “non-contact status for misconduct.”