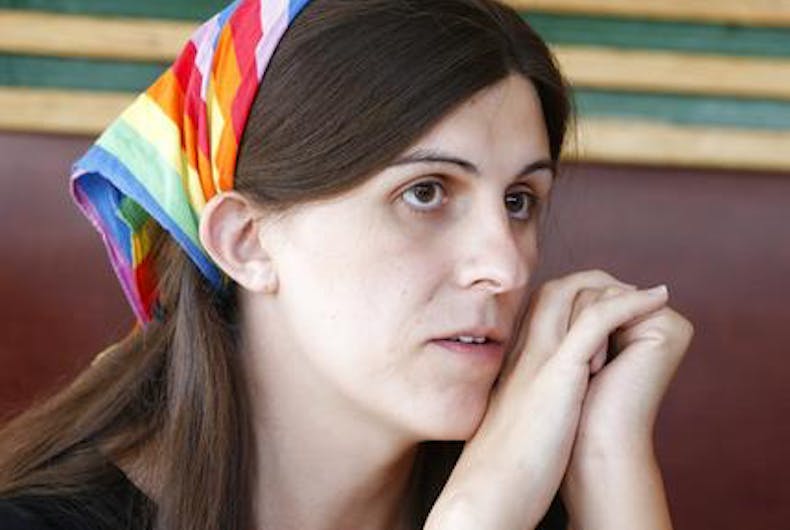 Democratic nominee for the House of Delegates 13th district seat, Danica Roem, answers a question during an interview Wednesday, June 21, 2017, in Manassas, Va. The former journalist is trying to unseat one of Virginia’s most socially conservative lawmakers and make history as the first state legislator in the nation to win and serve as an openly transgender candidate. Photo: AP Photo/Steve Helber

She’s a transgender woman and an experienced journalist who sings in a metal band in her spare time.

He has sponsored some of the most socially conservative legislation in Virginia in the past 25 years, including a measure this year that would have restricted the bathrooms transgender people can use.

Democrat Danica Roem is challenging Republican Bob Marshall for his northern Virginia seat in the state House of Delegates. With such stark differences between the candidates, the race is expected to draw in big money and is being seen by some as a referendum on rights for gay and transgender people.

Roem would be the first openly transgender candidate to win and serve in a state legislature, according to the Victory Fund, a political action committee that supports her and calls Marshall “the most anti-LGBTQ member of the Virginia state legislature.”

“Danica Roem is a leader in a national movement of trans candidates who are determined to become a voice for their community in the halls of power,” said Aisha Moodie-Mills, president and CEO of the organization.

In an interview and through emails, Marshall defended his record and said he respects every person “because we are all made in our Creator’s image.”

“I’m not trying to tell people like Danica, formally Dan, how to live their life, and likewise they should not be forcing their views and behaviors on the rest of us,” Marshall, 73, wrote in one message.

Roem handily won a four-way primary in June and is part of a surge of young, first-time candidates Democrats hope will help it retake control of the GOP-led chamber for the first time in nearly two decades.

Campaign finance reports show she’s off to a strong fundraising start. Roem raised around $66,000 in the first six months of the year, compared with Marshall’s nearly $4,600, leaving her with about $9,000 less than Marshall in cash on hand.

During a recent interview, Roem, 32, energetically rattled off stats about issues like zoning and land use, topics she covered while reporting for two Virginia newspapers. She quit to campaign full time and said it’s hard now to find time with her band, Cab Ride Home, which has played shows in the Midwest, along the East Coast and in Europe.

Roem started pursuing therapy to begin her gender transition when she was 28. While she talks openly about it – saying transitioning “fundamentally altered my life for the better” – she’d rather focus on local issues: jobs, schools and improving one of the area’s most congested thoroughfares.

Marshall has spent too much time on social policy, she argues.

He authored a now-void constitutional amendment that defined marriage as between one man and one woman. He sponsored a bill banning gay people from openly serving in the Virginia National Guard. This year, he unsuccessfully pushed a bill that would have generally prohibited people from using a bathroom of the opposite sex in government-owned buildings.

But Marshall pointed out he’s authored 60-plus bills and studies that have become law. Among them: prohibiting warrantless searches of cellphones and computers and streamlining the paperwork for doing business in Virginia.

He’s also tangled with his own party, often over government transparency.

“So many times in Richmond, it’s maintain the status quo, ‘Don’t do this, don’t bring this up,'” Marshall said.

Recently, the two candidates took opposing positions before the Prince William County School Board as it weighed whether to expand its nondiscrimination policy to include gender identity and sexual orientation. The board approved the expansion last month after extensive debate.

Jeannie and Darin Lowder, whose children attend Prince William County Public Schools, said before the board’s vote that they plan to vote for Marshall, largely because of his unwavering support for parents like them, who didn’t want to see the nondiscrimination policy expanded.

That kind of constituent connection could help Marshall, who is an “institution” in the district, said Quentin Kidd, a political science professor at Christopher Newport University.

But Manassas resident Hope Vella, who is gay, said Roem has her vote, in part because she was inspired to see someone being unapologetically herself and running on an inclusive platform.

“If you’re not like me, you’re disposable” seems to be the prevailing attitude in politics, said Vella, who was moved to tears when she met Roem.

Since Marshall was first elected in 1991, the district, which covers Manassas and Prince William County, has become more populous, diverse and left-leaning politically. In November, it was one of 17 Republican-controlled House districts Hillary Clinton won over Donald Trump in the presidential race.

“The district is changing … and at some point he’s likely to be defeated,” University of Mary Washington political science professor Stephen Farnsworth said. “We’ll see depending on the campaign whether this year is that year.”

These queer ghosthunters help spirits who are dying to come out