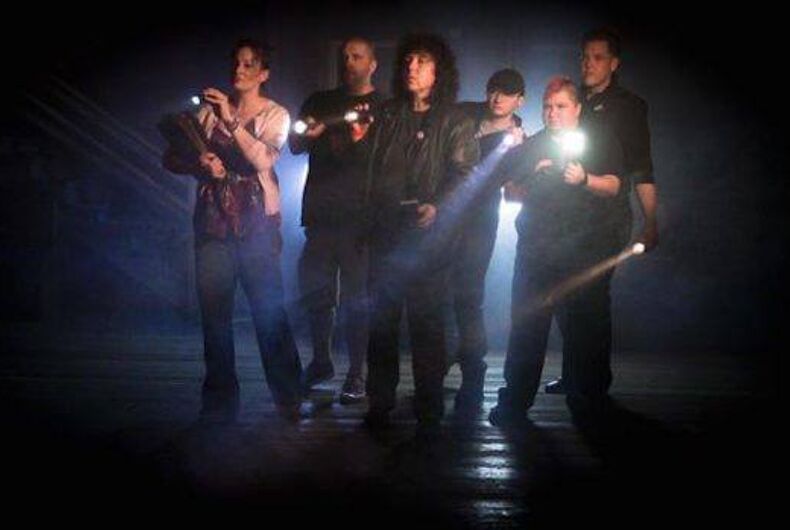 One of our favorite reality web series, Queer Ghost Hunters, has returned for a second season. This year, the ghost hunters venture into Ohio State Reformatory, where the film “Shawshank Redemption” was shot. The prison was known for housing a large LGBTQ population. Many of them died there while incarcerated, leaving behind a lot of unfinished business.

LGBTQ Nation had an opportunity to chat with cast member Shane McClelland, who has been seriously hunting ghosts now for about three years. We talked about the latest season of Queer Ghost Hunters, how the ghost hunters locate LGBTQ entities, and whether or not sexuality exists in the afterlife.

What can fans expect from the new season of Queer Ghost Hunters?

A lot! Personally, I think the season is amazing and better than the first season. The building where we are investigating is absolutely stunning and rich with history and queer history. We did a few interviews with folks who work there, too. So, folks will get more behind the scenes information and a lot of the buildings history. On top of that, we make contact with several different entities, including one that we think may be trans.

Do you ever get creeped out by the work you do?

Sometimes. I mean, you’re wandering around an old building looking for ghosts. You’re bound to scare yourself at some point, just from heightened sensations. But at this particular location there are also several interactive entities. You end up getting touched, grabbed, shoved, and seeing entities. Scott was shoved in the “ladies” wing of the prison. I saw a full bodied apparition in one of the showers. I think everyone saw something or got touched. But no one ran screaming. Well, maybe Amber.

Where do you find LGBTQ ghosts and how do you confirm they are, indeed, LGBTQ?

It’s kind of an involved process. While we believe there are queer ghosts everywhere we go (just like there are queer living people everywhere), we do some research to try to find locations that seem rich with queer history. Our logic is that we’ll increase our odds of making the kind of contact we want. After that we try to create a safe and welcoming atmosphere, so that entities feel comfortable expressing and sharing secrets that they may never have shared with anyone else. We do that by introducing ourselves and explaining how we identify and what that means–a lot of the words for sexuality and gender didn’t exist until more recently. Then it’s just a matter of asking and them answering!

Does sexuality exist in the afterlife?

I think sexuality does exist in the afterlife. I think you can find examples across cultures of that being a belief (succubus and incubus and somewhat appropriate and familiar examples). That said, if it doesn’t exist in the way we understand it among living people, it could exist in a different fashion. Or entities can at least recall what it was like to have a sexuality, when they had a physical body.

Do you think LGBTQ ghosts struggle more than heterosexual-identifying ghosts?

Interesting. I don’t think anyone has asked that question before now. From my experiences and the stories that have been shared with us, I don’t think they do, or at least not in the same way we do. I think a lot of the frustration from queer ghosts comes from not being able to share these stories with folks, because they aren’t asked, or people don’t acknowledge the possibility when interacting with them.

What do you find most challenging and most rewarding about your line or work?

It’s challenging being a small crew with limited funds. Queer locations are hard to find and scattered across the world. They require a lot of work to adequately dig up and explore. A lot of the history that we’re looking for hasn’t been recorded. That said, I think the most rewarding part is restoring those pages to the history books and sharing these stories with the public.

Has there ever been a time when an LGBTQ ghost has not wanted your assistance?

I don’t think this has happened yet. Most of the queer ghosts we come across are super excited to get to talk with folks who understand. They want to tell this stories and hopefully start to be remembered more authentically.

Has there ever been an instance where two LGBTQ ghosts have fallen in love with one another? Have you ever considered playing matchmaker?

To my knowledge, the team hasn’t found that yet. But I would image if love and sexuality exist through to the afterlife, it could be a possibility, and maybe we’ll discover it one day. I think the closest we’ve come is in season 1 with Madeline and Lori.

What advice do you have for people who may be interested in getting involved in ghost hunting?

You don’t need all the gadgets to get started. You can get those later if and when you decide you want them. Find some cool people you don’t mind hanging out in dark buildings with. Always ask permission of the locations you’re investigating. After that you just need a flashlight, or a flashlight, and a voice recorder. Those two things are pretty basic and can let you have a fantastic time!

You can also always reach out to us on YouTube, Facebook, or Twitter and we’ll be more than happy to chat with you about getting started!

Here’s the trailer for Season 2 of Queer Ghost Hunters…

Is #FakeNews the only thing that can save us from Trump’s venomous presidency?