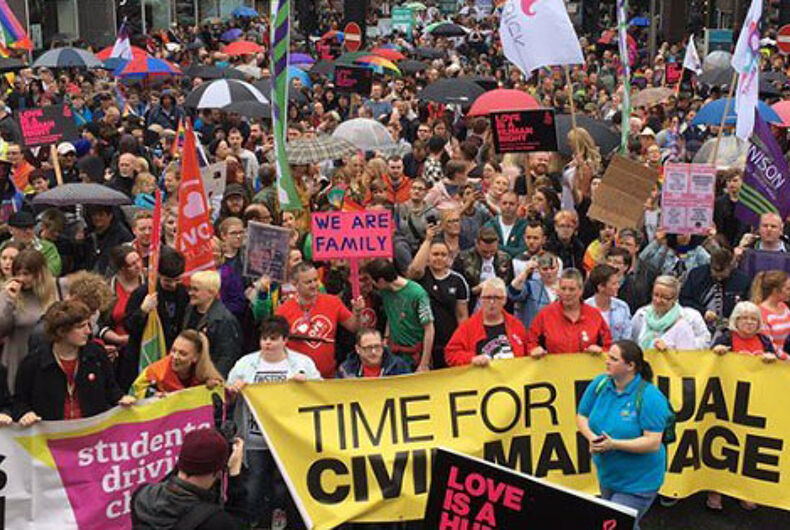 Belfast was awash in rainbow banners Saturday as marchers by the thousands filled the streets of Northern Ireland’s capital and largest city, calling for the government to end its ban on same-sex marriage. It is the only part of the United Kingdom where lesbian, gay, bisexual and transgender couples cannot marry a member of the same sex.

The demonstrators marched to City Hall, carrying aloft banners declaring “Love is a Human Right.” Once there, gay, Christian and government leaders stood together in their call for marriage equality.

“Belfast city council has already passed a motion before in favor of marriage equality,” McAllister said, “and I do hope we see it in this city and across Northern Ireland very soon.”

“There was lots of lobbying against mixed religious marriages and nowadays we are all embarrassed about that,” said Canon Charles Kenny, who has been a Church of Ireland priest for almost 50 years. “And I think in the future we will also be embarrassed about this ban on same sex marriage.”

Kenny was joined by Methodist and Presbyterian ministers on the steps of St Anne’s, the city’s Anglican cathedral. The Democratic Unionist party, which now formally supports British Prime Minister Theresa May’s minority government, has consistently blocked moves towards marriage equality, and may no longer have that power going forward.

A poll conducted in June 2016 by an Ipsos MORI showed marriage equality has 70 percent support in Northern Ireland. Gay and lesbian couples are currently limited to civil unions in the U.K.-controlled province.

Why didn’t Trump issue a pride proclamation & what does it teach us?

Florida deputy comes out as transgender: ‘I’m happy to finally be me’