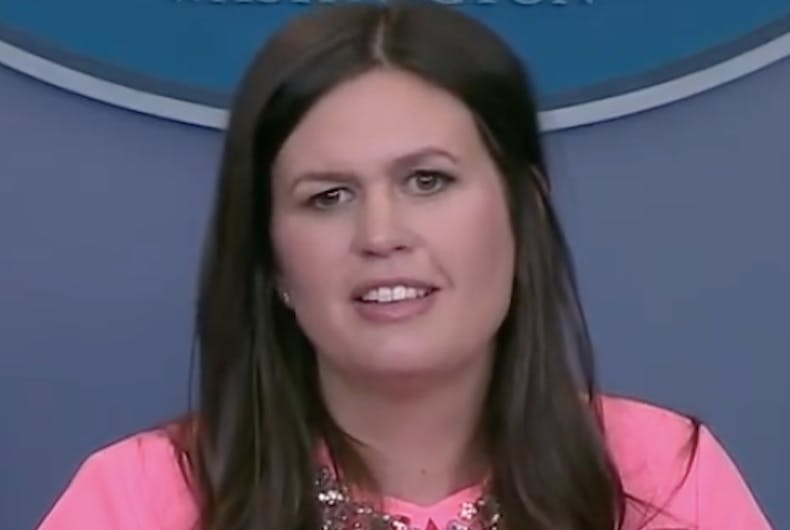 Finally, White House Press Secretary Sean Spicer had the decency to resign after all his blatant lies – like the inauguration crowd size, Elton John supposedly appearing, and the administration having no meetings with Russian diplomats before the inauguration – and his factual blunders – like Hitler never used chemical weapons on his own people – and his obvious abuse and hatred of the White House press corps.

Now we’re stuck with Sarah Huckabee Sanders, the mean girl we all had to endure in middle school, who continually violates her vow to uphold her Evangelical Christian beliefs by seriously disobeying the 9th Commandment: “You shall not bear false witness against your neighbor,” by lying through her teeth.

She does, though, adhere to Commandment 5: “Honor you father and your mother,” by following the distorted lead of her hate-filled, hypocritical, and bigoted self-righteous father, Mike Huckabee, Christian minister, former Arkansas governor, and Republican presidential candidate.

Let us not forget that Huckabee organized a rally in support of Rowan County, Kentucky, Clerk Kim Davis who become the face of resistance to the 2015 Supreme Court’s ruling legalizing marriage for same-sex couples throughout the United States.

Only hours after the Court’s ruling in June 2015, Davis ordered her staff to stop issuing marriage licenses. Though she has been charged with a court order, through her lawyers she expressed her belief that granting marriage licenses to same-sex couples “irreparably and irreversibly violates her conscience” because it goes against her religious beliefs. She stated that she fears going to Hell for violating “a central teaching” of the Bible if she were to comply with the Supreme Court’s decision.

Davis, however, seems to practice a form of “cafeteria Christianity” by picking and choosing which of the “central teachings” she will follow. Possibly Davis chose to run for the job of issuing marriage licenses in her county since she has been issued four such licenses herself by divorcing three times: 1994, 2006, and then again in 2008.

Additionally, according to published accounts, Davis “gave birth to twins five months after divorcing her first husband. They were fathered by her third husband but adopted by her second.”

Huckabee saw no apparent hypocrisy by supporting Davis’s decision to defy the law of the land. Mike Huckabee issued a statement backing her: “I spoke with Kim Davis this morning to offer my prayers and support. I let her know how proud I am of her for not abandoning her religious convictions and standing strong for religious liberty. She is showing more courage and humility than just about any federal office holder in Washington.”

Huckabee called for a “National Chick-fil-A Appreciation Day” following Chick-fil-A CEO Dan Cathy’s pronouncement in 2012 that he opposes same-sex marriage, and in published accounts asserted: “We are very much supportive of the family – the biblical definition of the family unit. We are a family-owned business, a family-led business, and we are married to our first wives. We give God thanks for that.”

During the last presidential primary season, Mike Huckabee presented a keynote speech at the “National Religious Liberties Conference,” organized by self-described “Christian Pastor,” Kevin Swanson. Swanson is infamous for his consistent calls for imposition of the death penalty on homosexuals, warnings that the Girl Scouts and the movie Frozen convert girls into lesbians, and accusations that homosexuals and women who wear pants (look out Hillary) bring on natural disasters.

During his opening remarks at the conference, Swanson quoted scripture: “Yes, Leviticus 20:13 calls for the death penalty for homosexuals,” and continuing, he declared that he was “willing to go to jail for standing on the truth of the word of God.”

In the past, Huckabee, on Fox News, placed blame for the shooting massacre at Sandy Hook elementary school in Newtown, Connecticut by stating: “We ask why there is violence in our schools, but we have systematically removed God from our schools. Should we be so surprised that schools would become a place of carnage?”

This is Huckabee’s reiteration of a theme he peddled after the mass murder at a movie theater in Aurora, Colorado when he attributed the bloodbath to a society that removed God and religion from the public realm: “[S]ince we’ve ordered God out of our schools, and communities…we really shouldn’t act so surprised …when all hell breaks loose.”

Throughout his campaign to the present day, Donald Trump has energized his base of supporters by consistently blaming and attacking the media generally as well as specific outlets. A very brief sampling includes: “[Journalists are] among the most dishonest human beings on earth.” He continually calls them “liars” whenever they write stories unflattering to him and his administration.

“The failing New York Times wrote a big, long front-page story yesterday. And it was very much discredited, as you know.”

At press conferences, Trump tells reporters to “sit down” when they ask questions he doesn’t like, and he speaks of a “running war” with the media. He has even accused “freedom of the press” as the cause of terrorist bombings in the U.S.

He has cut back on the number of televised White House daily press briefings, and he rarely consents to giving press conferences.

Considering Sarah Huckabee Sanders familial background and past performance with her recent elevation as chief White House press secretary, the stormy relations between the Trump administration and the press under Sean Spicer has the potential of getting even worse, if that can be imagined.

I will definitely miss, however, Melissa McCarthy’s parody of Sean Spicer on NBC’s Saturday Night Live. Now that was spicy!

Hey, maybe SNL’s producer, Lorne Michaels, will invite Spicer to host the show. Perhaps he will be playing Melissa McCarthy. Wow, the possibilities.

Creationists come up with a bizarre way to insult LGBTQ people