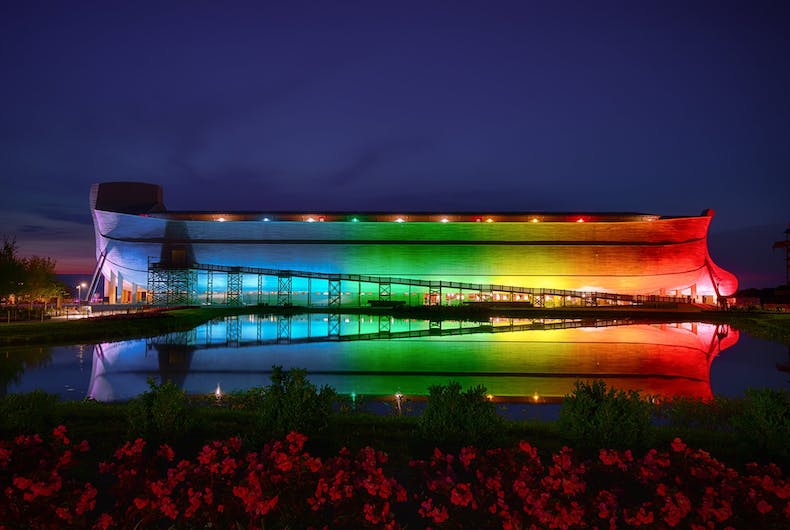 Ark Encounter, a fundamentalist Christian theme park that boasts a “life-size Noah’s Ark,” will light that ark up every night with a rainbow as a way to “take back” that symbol from LGBTQ people.

But Ken Ham, the founder of Answers in Genesis, the group behind Ark Encounter in Williamstown, Kentucky, says that he’s lighting up the ark with a rainbow as a way to show his hostility towards LGBTQ people.

Christians need to take back the rainbow as we do @ArkEncounter -God owns it-He decreed it's a sign of His covenant with man after the Flood pic.twitter.com/cNR51zTbPX

The ark was lit up in rainbow colors once in February, but now the lights will be permanent.

We now have the new permanent rainbow lights @ArkEncounter so all can see it's God's rainbow & He determines its meaning in Genesis 6 pic.twitter.com/zdT0g8Jevp

Ham said that the rainbow is a sign of God’s covenant with humanity that he would never again wipe out all life on the planet with a flood… he would use fire next time instead.

The rainbow is a reminder God will never again judge the wickedness of man with a global Flood–next time the world will be judged by fire pic.twitter.com/K568yMnNsP

If Ham interprets the rainbow as a sign that God will destroy all life on the planet, it seems strange that he would want that to be the biggest message of a theme park.

Of course, this didn’t stop Twitter from interpreting a building lit up in rainbow colors in the usual way.

The move follows news from last week that Ark Encounter was “sold” to a religious non-profit organization for $10, in what Williamstown city councilman Kim Crupper said he believes is the “first step” in getting tax-exempt status for the theme park. Ark Encounter, which has a petting zoo and a zip line course, already gets out of most of its property taxes, but has been in dispute with the state over collecting sales tax and was the subject of a local city ordinance that put a 50-cent tax on tickets in order to fund emergency response services that the theme park uses.

The sale resulted in the state Tourism Department suspending an $18 million tax incentive for the theme park.

Sean Spicer was replaced by a homophobe’s daughter