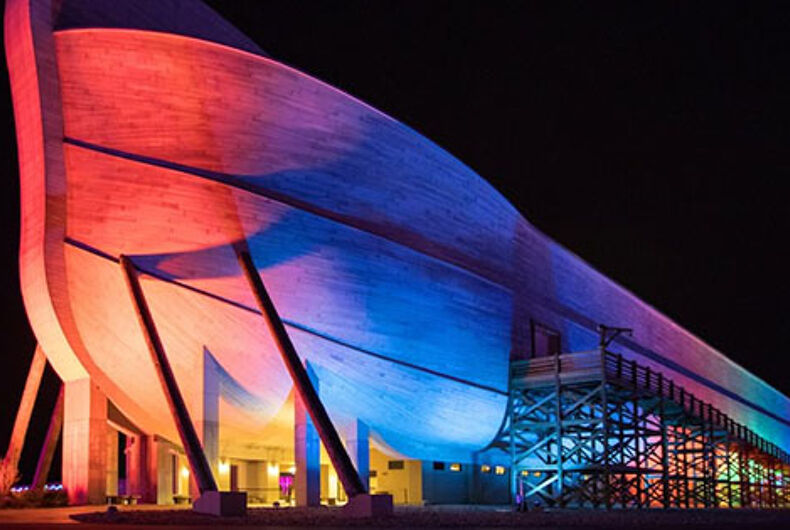 Now that the world’s first-ever Bible amusement park is a reality, its owner, anti-LGBTQ preacher Ken Ham, wants to reinforce the message that the rainbow does not belong to queers, but to God. Or so he claims, in the face of a preponderance of rainbow images associated with LGBTQ pride.

That is why Ham has announced his decision to make the colorful lights that illuminate the creationist’s recreation of Noah’s Ark a permanent fixture of his Kentucky missionary menagerie. On his Ark Encounter website, Ham explains, “The Ark is illuminated with rainbow colors in the evening as a testament to the true meaning of the rainbow.” 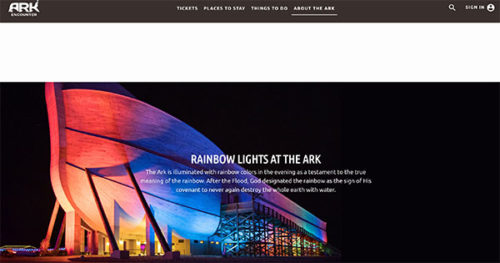 As JoeMyGod pointed out in December, Ham implored his followers to not allow LGBTQ Americans to “proudly wave rainbow-colored flags in defiance of God’s command and design for marriage.”

“The rainbow was a symbol of God’s promises before the LGBTQ movement—and will continue to be after that movement has ended,” he wrote. “As Christians, we need to take the rainbow back and teach our young people its true meaning.”

We’ve decided to enhance the rainbow lights and make them a permanent feature during evenings at the Ark, located south of Cincinnati. We will be working over the coming months to ensure this change is permanent. It’s all part of “taking the rainbow back.”

“We’re trying to help Christians and unbelievers recognize the true meaning of the rainbow as it’s given to us in the Bible (Genesis 9).”

As Hemant Mehta posted in his Friendly Atheist blog: “Let the Bizarro Creationist Rainbow forever remind you that the Christian God is synonymous with death, destruction, and genocide. He loves you, and that’s why he has to constantly threaten you.”

“It’s just another awful lesson kids will learn if they visit Ark Encounter.”