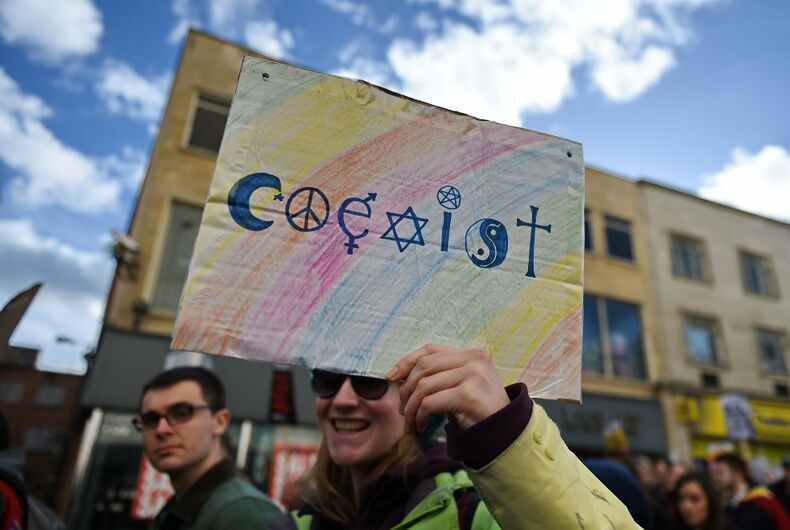 Earlier this month, Muslims for Progressive Values (MPV), a pro-LGBTQ and pro-gender equality Muslim organization, partnered with the Human Rights Campaign (HRC) to host a table at the annual Islamic Society of North America (ISNA) convention in Chicago, and MPV says they were forced to leave because of their advocacy of LGBTQ equality.

ISNA is the largest Muslim organization in the country whose mission is “to be an exemplary and unifying Islamic organization in North America that contributes to the betterment of the Muslim community and society at large.” Their programs include education, interfaith outreach, and services for Muslim immigrants.

ISNA has taken pro-LGBTQ stances in the past, including taking part in an interfaith coalition in support of anti-discrimination legislation in 2013 and declaring itself “outraged” by the Pulse shooting. HRC has also participated in the conference before without being kicked out.

This year, Frank Parmir from MPV and HRC’s religion and faith program manager Michael Toumayan co-hosted a table at the conference, and both organizations distributed pro-LGBTQ brochures. Their booth was approved by convention organizers in advance.

Parmir posted on Facebook that the table didn’t get much attention, and he speculated that convention-goers might not have understood that HRC was an LGBTQ organization. At around 3 in the afternoon, though, an attendee in “full Salafi garb and beard” started lecturing Parmir and Toumayan about homosexuality. “To be a ‘real Muslim,’ one must assert that homosexuality is a sin,” Parmir says the man said.

At some point, they agreed to end the discussion. An hour later, a group of convention organizers including Conference Director Basharat Saleem approached the table and asked them to shut it down because “the convention was a religious, private, and family-oriented event.” They said they wanted to discuss the decision, and security personnel escorted them to another room for a conversation with Saleem and Farhan Syed of the ISNA Executive Council, according to an MPV press release.

When it became apparent that they were not going to be allowed to stay, they tried but were unable to contact leaders at MPV and HRC. So they packed up their things and left.

On their way out, Parmir asked to have one last conversation with ISNA organizers. They again affirmed their support for LGBT legal rights, but they had a problem with the brochures that advocated acceptance of LGBTQ people within the Muslim community and equality for women in Islam.

“They are glad to affirm HRC’s advocacy of legal rights for sexual minorities,” Parmir posted on Facebook. “But they are very uncomfortable with MPV’s advocacy of gender equality and LGBTQ inclusion. [..] Their religious values do not allow any suggestion that members of the LGBTQ community can be Muslim if they are not repentant. They are adamantly opposed to the notion that there is any room in Islam for a conversation about the possibility of any equality of legitimacy between heterosexual intimacy and homosexual intimacy.”

MPV’s statement included the titles of some of the literature that ISNA did not like, which included HRC’s “Coming Home to Islam and to Self” and “Coming Out as a Straight Supporter,” as well as MPV’s brochure of principles, which advocates inclusive prayer spaces for LGBTQ people, and their “#ImamsForShe” campaign.

“I think if HRC had not partnered with MPV, the booth would have been ok,” Parmir said.

In a statement, HRC said that it was “extremely disappointed” with the incident.

ISNA has not responded to requests from multiple media outlets for comment.

Thought we were making progress! https://t.co/AYLNO09c80