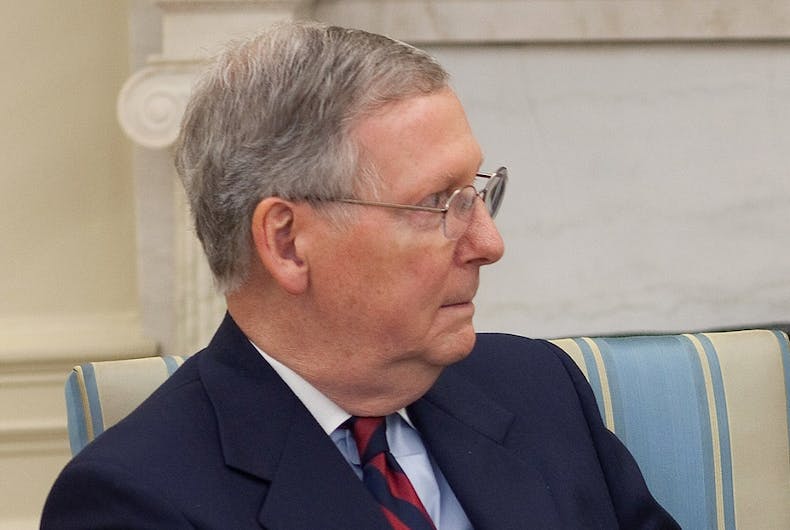 Mitch McConnell (R-Kentucky) announced that the vote on the Better Care Reconciliation Act – a bill that would drastically cut Medicaid, kill requirements that health care actually cover things and allow states to set even lower requirements for insurance, and cut funding from Planned Parenthood, in order to give people with incomes over $200,000 a tax cut – has been delayed.

There are 52 Republican senators and 48 Democratic senators. Rand Paul (R-Kentucky) and Susan Collins (R-Maine) have already said that they will vote against the BCRA along with all the Democrats, meaning that at most 50 senators will vote for the bill and Mike Pence, as Vice President, would break the tie in favor of the bill. But if McCain doesn’t vote, then the bill will fail 49-50.

McCain, who is currently making use of government-provided health care, is expected to vote for a bill that would prevent millions of other people from getting the care that he received. Several weeks ago he said that 22 million people losing access to health care was “a factor” to consider, but not a reason to jettison the bill.

His opinion is probably affected by the fact that he will not be one of those 22 million people.

This past week, news on the BCRA was dominated by a letter from two major health insurers, America’s Health Care Plans and the BlueCross BlueShield Association, that said a new amendment to the bill that would allow people to buy bare-bones insurance would cause the price of real insurance to spiral out of control, leading to even more “widespread terminations of coverage” than the CBC previously estimated.

The health insurance industry spent millions of dollars lobbying against Obamacare in 2009 and was generally quiet during Congress’s earlier repeal efforts, so they’re no friends of the current law. But they were pushed to worry more about clumsy revisions to the law that will have negative impacts on everyone.