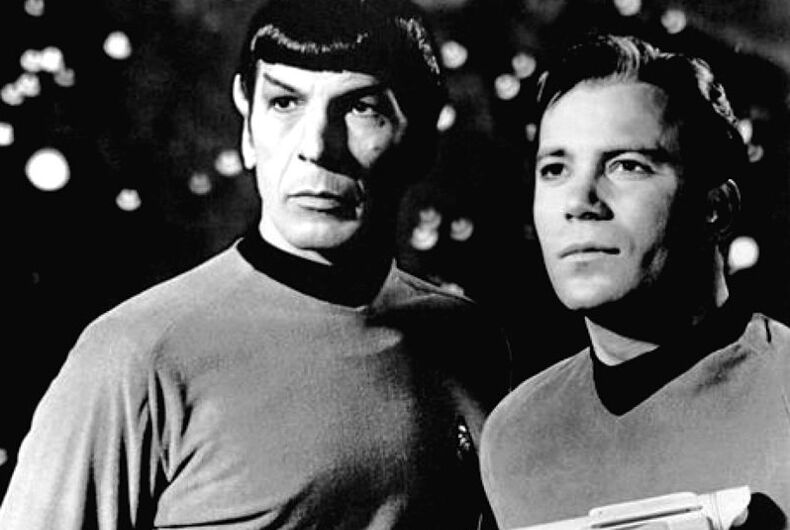 "Hands where I can see them, Mr. Spock."Photo: Wikipedia

I wrote this for The Bilerico Project back in 2014, but being amazed at vintage butt-slapping never goes out of style.

Because I’m a nerd, I’m in the process of rewatching the original Star Trek series.

I was brought up on The Next Generation and Deep Space 9, with their expansive universes and decent graphics departments, so watching The Original Series is a lot of campy fun. Like in the pilot episode, a comm officer tells Captain Pike “We have an incoming transmission” and then an index card pops out of a slot in the wall.

We can travel faster than the speed of light, but, goddammit, we’re sticking with paper until that “computer monitor” fad ends!

I just got to the “Charlie X” episode, where the Enterprise picks up a 17-year-old boy who was the only survivor of a crash-landing when he was three. He’s been living alone (…or has he? Duh duh duuuuuhhhhhh…) ever since, so he needs to learn how to interact with other humans. Like Seven of Nine without the skin-tight onesie, if you will.

Anyway, at one point he observes two crewmen talking about how they’re going to hang out later, and then witnesses a butt slap. Seriously, I had to rewatch the scene because, well:

Crewman #1 (holding futuristic repair equipment): I’ll put the equipment away and I’ll see you in the rec room, huh?

Crewman #2 (already walking towards the door): You got a deal, friend! (Turns back to Crewman #1, slaps his butt, and then walks out the door)

It was obvious and awkward enough to be the Chekhov’s gun of butt slaps, and you don’t have to wait long for it to be fired. Charlie slaps the butt of a yeoman he finds attractive after she offers to meet him later, and she gets mad and tells Charlie to ask Captain Kirk about the complexities of butt-slapping. Here’s James Tiberius Kirk’s priceless explanation:

There are things you can do with a lady that, uh… Listen, there’s no right way to hit a woman. Man-to-man is one thing, but man and woman, it’s a, well, it’s another thing.

Thanks, Cap’n! Men can touch each other’s asses as long as we can tell ourselves that there’s some violent motivation involved.

So now I’m left wondering if butt-slapping was really so common among men in 1966 that they could simply not imagine a future without it. As if a producer said, “Sure, aliens with green blood and no emotions are fine, but no butt slapping? Our audience will never accept that, it’s just too ridiculous.”

Or maybe this was a writer’s fantasy: “One day people of all races will work together to explore the galaxy. And there will be man-on-man butt slaps. Enough so that starship captains will have to explain the practice to aliens.”

Buddhist monk gets down at Korean queer parade