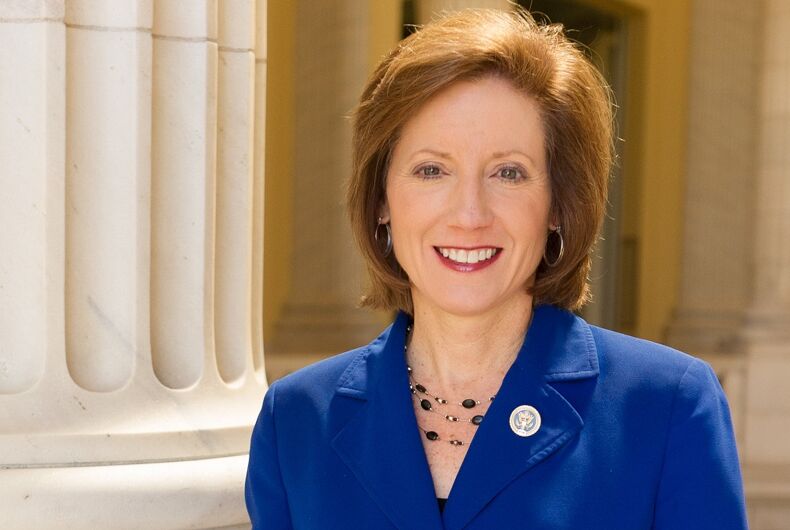 Representative Vicky Hartzler said in a radio interview this past Thursday that transgender people in the military were a threat to America comparable to “North Korea, and Putin, and ISIS.”

The Missouri Congresswoman was talking with the Family Research Council’s Tony Perkins show “Washington Watch” when he asked her about “social experimentation” in the military. Hartzler said, “At a time when we should be focusing on the threats from North Korea, and Putin, and ISIS, we’re having to deal with a threat here at home — a domestic threat — of allowing transgenders in our service, which is a real problem because it impacts their readiness, and it’s a huge cost for our military.”

She went on to say that the “cost” of transgender people serving in the military openly would be $1.35 billion, much greater than the $2.4 million to $8.4 million the RAND Corporation found in a study. Those figures represent 0.04% to 0.13% of current military expenditures on health care.

This is not the first time Hartzler has gotten attention for hateful comments about LGBTQ people. In 2011, she compared same-sex marriage to pedophilia, arguing, “Why not allow an uncle to marry his niece? Why not allow a 50-year-old man to marry a 12-year-old girl if they love each other and they’re committed?”

Since the Obergefell v. Hodges decision in 2015 that required states to allow all adult couples to marry, no state has passed a law allowing uncles and nieces to marry. Perhaps Hartzler is not very good at predicting actual threats.

‘Parks and Recreation’ actress comes out as queer