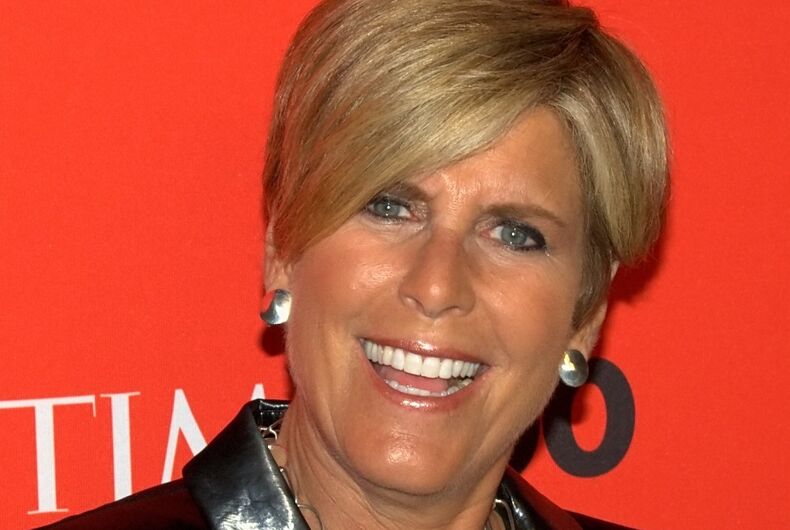 In an interview with USA Today, lesbian TV personality Suze Orman said that LGBT people who are “proud” don’t get discriminated against.

She was asked, “What can those who are in the LGBT community do to fight back against discrimination — which can potentially affect pay and ability to move up at work?”

To which she answered:

Step up for what you want. Own the power to control your destiny. That is key. Because I was proud of who I am, I was never discriminated against because I was gay. The less self-worth you have, the less net worth you have. Power creates money. Powerless repels it.

I once lost a job because of my employer’s homophobia, and, without getting into details, I can say with certainty that a lack of pride didn’t cause discrimination. If anything, if I were less proud at the time and stayed in the closet at that job, then I probably wouldn’t have lost it.

Orman, on the other hand, had her first book published in 1995, before Ellen Degeneres came out. She had several books under her belt by the time CNBC began airing The Suze Orman Show in 2002. When she came out in 2007 in an issue of New York Times Magazine, she already had an audience and the country was much more accepting of gay celebrities than it was when she was first trying to make a name for herself in the media.

It seems to me like her ability to keep homophobia from stifling her career had less to do with pride in herself and more to do with successfully navigating other people’s reactions.

And maybe a public figure who spent over half of her career in the closet shouldn’t be lecturing the rest of us about how our employers’ homophobia, biphobia, and transphobia are our own fault for not being proud enough.

I don’t follow Orman closely enough to know if the “bad things only happen to people who deserve them” is a regular part of her shtick. She’s rich and famous, so it wouldn’t be surprising if she liked to think that she’s rich and famous because she’s morally superior to others.