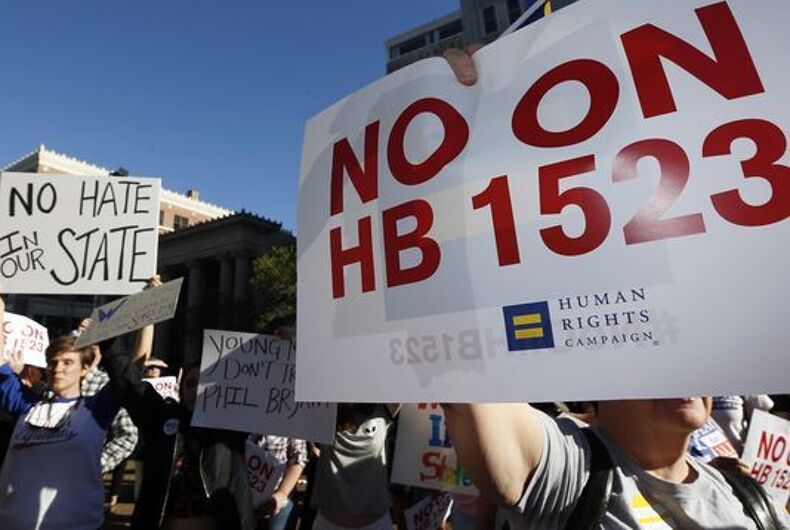 In this April 4, 2016, photograph, protesters call for Mississippi Republican Gov. Phil Bryant to veto House Bill 1523, which they say is discriminatory against LGBT people, during a rally outside the Governor's Mansion in Jackson.Photo: Rogelio V. Solis/AP

A Mississippi law allowing magistrates to refuse to issue marriage licenses to same-sex couples, and businesses to deny them their services, is being challenged yet again.

“HB 1523 is offensive to the rights of LGBT and other dissenting Mississippians and to the Supreme Court’s command on this burning civil rights issue,” they wrote.

It was blocked from going into effect in July of last year by a federal judge, who ruled it unconstitutionally favored particular beliefs, and allowed for the unequal treatment against the LGBTQ community. However, last month the 5th Circuit threw out the ruling, arguing the plaintiffs could not prove they had been discriminated against by the law, and therefore did not have standing.

“The panel’s decision to reverse the district court ruling begs the question of who gets to challenge laws in court and when. LGBT Mississippians should not have to endure even more profound discrimination before they can ask the court for help,” said Susan Sommer, Director of Constitutional Litigation at Lambda Legal in a statement.

“Mississippi’s HB 1523 is an extreme discrimination law dressed up in religious clothes,” Sommer continued. “The wave of anti-LGBT laws like it in state houses around the country, including North Carolina and Texas, comes in defiance of the Supreme Court’s ruling for marriage equality and hard-won rights for transgender people. The Supreme Court’s ruling in Obergefell, reaffirmed just last week in Pavan v. Smith, means that same-sex couples are entitled to full marriage rights, not the half-baked rights on offer under HB 1523.”

“Standing is not about who wins and who loses, but who has access to justice,” said Beth Orlansky, advocacy director for the Mississippi Center for Justice. “Our plaintiffs have already seen the ill effects of HB 1523 without it even taking effect and they should get their day in court.”

These attempts to gut marriage equality shows that after two years of same-sex couples earning the right to marry, Republicans are still doing everything in their power to undermine the benefits that come with that union, in clear violation of the Supreme Court’s ruling.

Making matters more disconcerting still, President Donald Trump’s appointee to the Supreme Court, Justice Neil Gorsuch, has already shown that he agrees with the line of thinking that says that just because marriage equality is the law of the land, doesn’t mean anyone has to act like it.

With news that Supreme Court Justice Anthony Kennedy, so often the swing vote and a much more moderate voice than Gorsuch, is likely to retire sooner than later, the future of the most notable win for the fight for LGBTQ rights remains in serious question.

Cases like this one in Mississippi, as well as the one in North Carolina recently that allowed that state’s magistrate recusal law stand, are being watched by both sides as important precedent setting legal fights.

Someone deliberately set fire to this LGBTQ center serving African-Americans