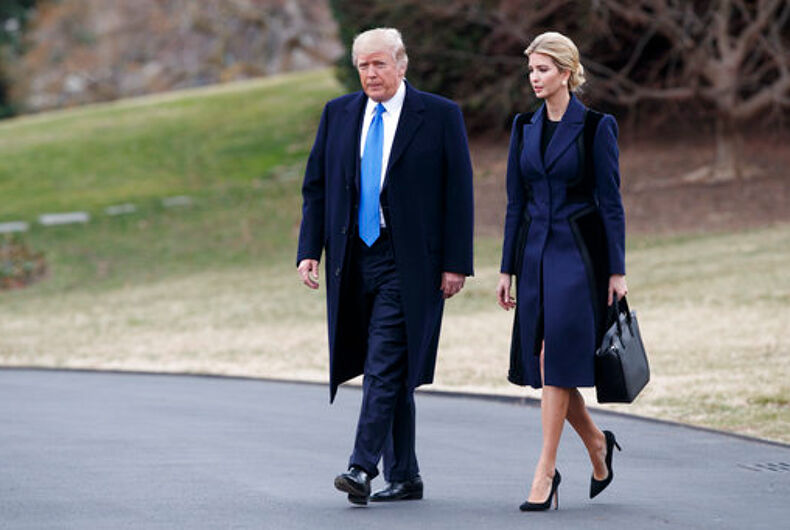 FILE - In this Wednesday, Feb. 1, 2017, file photo, President Donald Trump and his daughter Ivanka walk to board Marine One on the South Lawn of the White House in Washington. Photo: (AP Photo/Evan Vucci)

Ivanka Trump has not been able to move her father in her direction on a number of key issues, most recently the transgender military ban. Before that, she couldn’t stop him from pulling America out of the Paris Climate Accord.

She was also not able to persuade him to make a pride month proclamation. She tweeted in support of the LGBTQ community while her father remained silent throughout all of June.

According to Politico, Ivanka learned of the transgender military ban the same way the rest of us did: By reading his tweet.

White House officials report that she was surprised by the ban, which is still pending a review from the Pentagon, and she appears to finally be getting the message that she can only do so much to keep the administration from continuing to take sharp right turns.

Now, while still wishing to move the needle on key issues, she seems resigned to her relative lack of effectiveness in having a real impact on the decisions coming from her father’s White House.

And she wishes people would lower the bar of expectation around what she is going to be able to accomplish. In short, it won’t be much. That becomes clearer with each passing month.

She and husband Jared Kushner are still getting credit for reportedly keeping the so-called “religious freedom” executive order in check, preventing it from going after LGBTQ people as strongly as anticipated. But that order still gave more power to churches to get involved politically, which historically has not been a boon to the queer community.

“Actions speak louder than words,” said Sarah McBride, national press secretary for the nonprofit Human Rights Campaign. “Either Ivanka is ineffective in her advocacy within the building, or her voice doesn’t matter to the president as much as she hopes it does.”

Both Ivanka and Jared declined to comment to Politico.