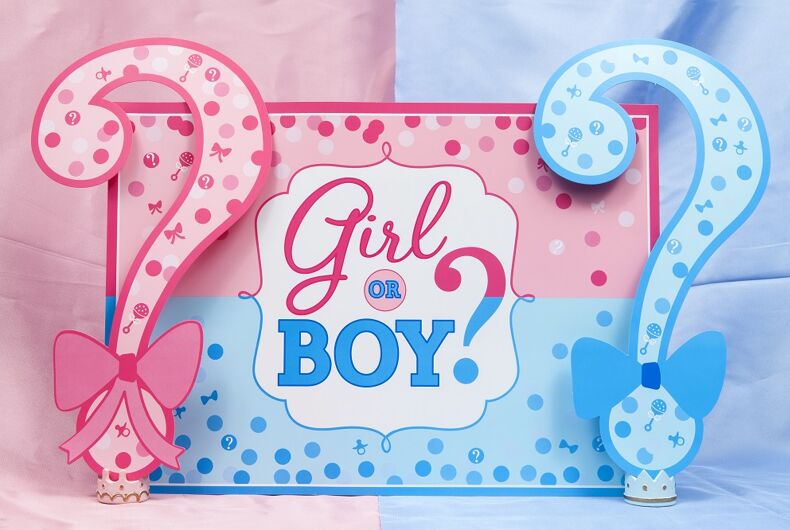 OK, you can tell that most of my friends don’t have kids – and the ones who do don’t expect others to be obsessed with their kids – because I just found out about this trend.

I clicked on an article about a shooting at a “gender reveal party,” thinking that it might be something interesting for this site. A “gender reveal party” sounds queer and vaguely counter-culture…. But then I googled it and found out how aggressively cisgender and heterosexual it is.

A gender reveal party is where expectant parents reveal whether their fetus is a boy or a girl based on ultrasound results. You might think that the name is incorrect, that an ultrasound can only reveal a future-person’s sex, but then the people who throw these parties don’t seem to care much about the distinction between sex and gender.

These sorts of parties have been around for a few years and they’re a Pinteresty sort of thing where parents will find cute ways to do the reveal, like getting a baker to make a pink or blue cake and then slathering it with white frosting so that the gender is revealed when the cake is cut.

It sounded off to me, and then I got to this part of a Huffington Post article where the writer gives some examples of themes for gender reveal parties:

These themes run the gamut from saccharine sweet ducks (“Waddle it be?”), to incorporated party games such as gender reveal scavenger hunts, to even more specific party titles printed on invitations such as, “Touchdowns or Tutus,” “Hair Bows or Bow Ties,” “Wheels or Heels,” “Sports or Sparkle,” “Staches or Lashes,” “Boots or Ballet,” Or – Lord, don’t get me started on these two – “Guns or Glitter,” or “Rifles or Ruffles.”

The entire thing sounds horrifying. This person doesn’t even exist yet, and people are already policing their gender?

And are parents expecting to treat their child radically differently if that child is a boy or a girl?

Besides the level of self-indulgence required to throw a party just to celebrate one part of a fetus’s anatomy, this only seems like a foreboding sign of how much pressure these parents will put on their kid in the future to live up to gender stereotypes. Because that’s just another form of self-indulgence, expecting another person to live up to your expectation of what a girl or a boy should be.

The right loves to say that “gender issues are being shoved down schoolchildren’s throats” whenever the topic of transgender students comes up, but we literally live in a world where people throw parties to assign a gender – along with a package of expectations and stereotypes – to a person who isn’t even born yet. Is it really any surprise if an 8-year-old can’t take the pressure to be something they’re not when that pressure has been building for 9 years?

Oh, and about that gender reveal party that ended in a shooting: 1 dead, 8 injured, and the shooter has not been caught. Police don’t know why it happened, but I’m sure that “The shooter had a gun” was a necessary condition for the shooting to happen. Maybe we shouldn’t label guns and rifles as something we expect boys to like, since no one should feel pressure to like killing people?

Texas dad talks about his transgender son in this amazing video