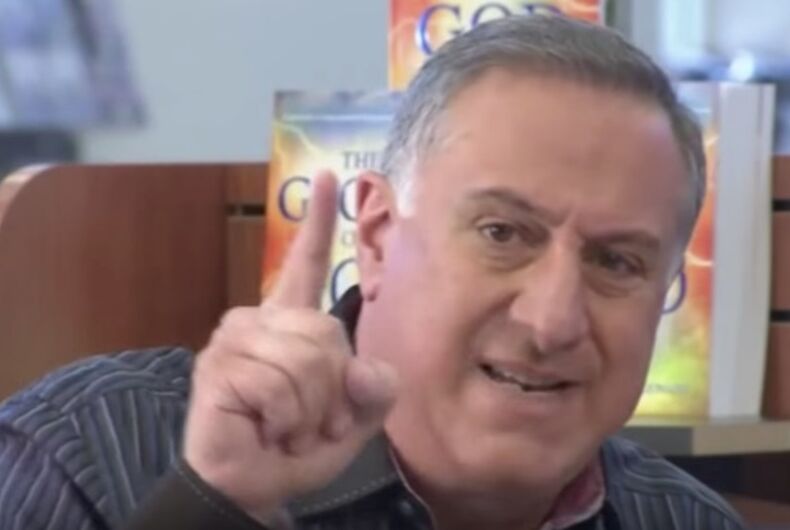 Pastor Frank Amedia, who was named a “Christian policy liaison” for Donald Trump’s presidential campaign, paid a visit to televangelist scam artist Jim Bakker’s show to talk about all the prophecies he’s received about Trump.

Amedia, who claims to be a prophet able to control natural events like tsunamis and tornadoes, told the host that God has given Trump a “breaker anointing” that allows the president to break up things like political parties, the news media, and North Korea.

Trump turns to Twitter because he’s able to discern the inconsequential tidbits of presidenting, Amedia said, because he gets commands directly from God. “I believe he receives downloads that now he’s beginning to understand come from God,” Amedia said according to our friends at Right Wing Watch.

Amedia, who was once implicated in a bribery scandal, has made several outlandish claims, including that he single-handedly stopped the 2011 Japanese tsunami from hitting a Hawaiian island his daughter was visiting.

“I stood at the edge of my bed and I said, ‘In the name of Jesus, I declare that tsunami to stop now.’ And I specifically said, ‘I declare those waters to recede,’ and I said, ‘Father, that is my child, I am your child, I’m coming to you now and asking you to preserve her.’ Apostle, it was seen by 400 people on a cliff. It was on YouTube, it was actually on the news that that tsunami stopped 200 feet off of shore. Even after having sucked the waters in, it churned and it went on and did devastation in the next island.”

God’s prophet, apparently, doesn’t believe in sacrificing your child to save mankind. Or science. Technology too.

‘Gender reveal’ parties are real, and they sound awful

These 3 wedding proposals from London pride will make your day