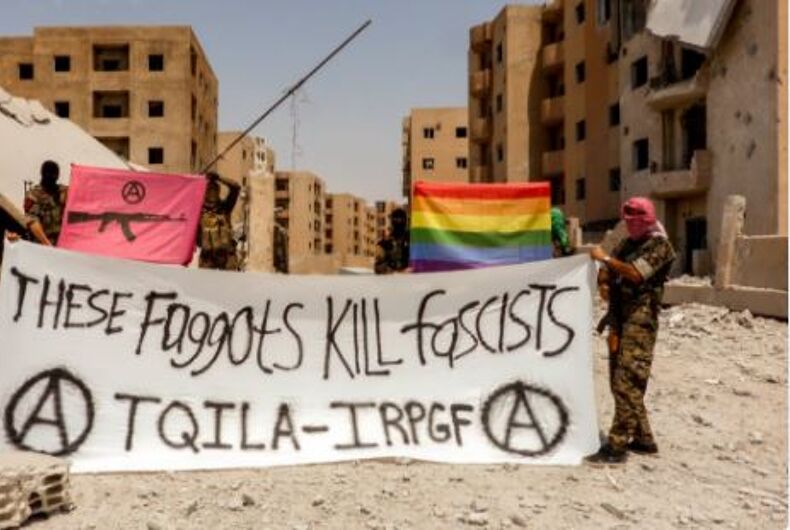 The Queer Insurrection and Liberation Army is fighting against ISIS forces in Syria. Photo: Twitter/IRPGF

The Islamic state militant group (ISIS) has been persecuting LGBTQ people for years. ISIS considers homosexuality to be a sin punishable by death, and has killed numerous gay and bisexual men, whom they have stoned and thrown off buildings.

Now, for the first time, an LGBTQ fighting unit has been formed to battle back against the fascists who would rather see them dead.

The Queer Insurrection and Liberation Army, or TQILA (pronounced “tequila”), as they are called, are a subgroup of The International Revolutionary People’s Guerrilla Forces (IRPGF). IRPGF, group of international volunteers fighting with Kurdish forces in Northern Syria, announced the formation of TQILA on Monday.

The formation of The Queer Insurrection and Liberation Army (TQILA), a subgroup of the IRPGF. Queer Liberation! Death to Rainbow Capitalism! pic.twitter.com/Tp1x2PZ079

In the statement, TQILA is said to be ready to “smash the gender binary and advance the women’s revolution as well as the broader gender and sexual revolution.”

“TQILA members have watched in horror as fascists and extremist forces around the world have attacked attacked the Queer community and murdered countless of our community members citing that they are ‘ill’, ‘sick’ and ‘unnatural’. The images of gay men being thrown of roofs and stoned to death by Daesh [another name for ISIS] was something we could not idly watch,” it continued.

It goes on to highlight anti-LGBTQ sentiment around the globe, and stresses that the issue is not one exclusive to the Muslim faith.

Just how many fighters are currently in TQILA, and how many of them are members of the LGBTQ community, remains unknown.

“Many of our comrades are within the LGBT*QI+ community,” Rojhilat said. “We are already fighting in Raqqa.”

ISIS has taken credit for the shooting at the Pulse nightclub in Orlando, as Omar Mateen pledged allegiance to the group during a 911 call during the attack. However, authorities have found no credible ties between Mateen and ISIS, and he also pledged support to other terrorist groups not allied with ISIS.

Charlize Theron ‘took a dip in the lady pond’