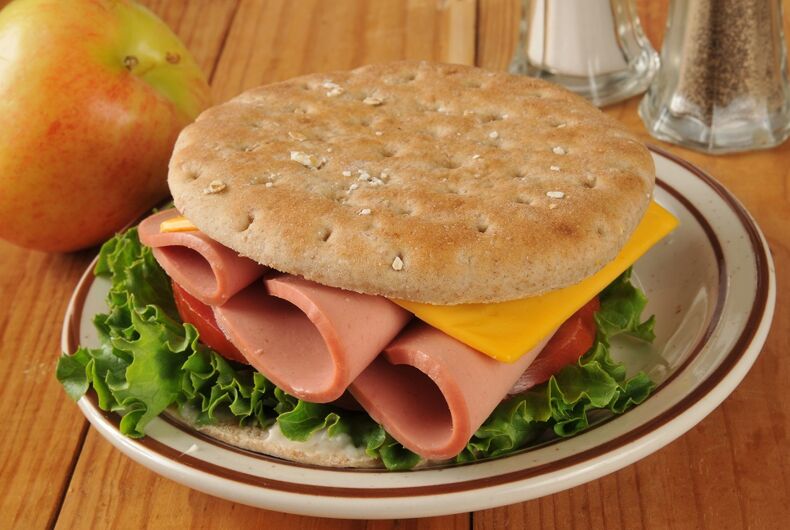 It takes a Masters degree in Italian to properly enjoy a bologna sandwich. Photo: Shutterstock

David Brooks wrote a column pretending to care about income inequality, and in it was this weird paragraph about that one time that he totally, 100% did not take an escort to a deli, shut up Shut Up SHUT UP:

Recently I took a friend with only a high school degree to lunch. Insensitively, I led her into a gourmet sandwich shop. Suddenly I saw her face freeze up as she was confronted with sandwiches named “Padrino” and “Pomodoro” and ingredients like soppressata, capicollo and a striata baguette. I quickly asked her if she wanted to go somewhere else and she anxiously nodded yes and we ate Mexican.

What’s really insensitive is that he didn’t ask if she was vegetarian or hated Italian food but instead told the entire country that she was too stupid to appreciate overpriced cold cuts.

But I guess actually talking with his friend is too much, considering how the native language of people without four-year degrees is unintelligible grunts and whimpers. It’s much more sensitive to let out an exasperated sigh, roll his eyes, and say “I guess we’ll have to go get tacos.”

Or, if he wanted to be as sensitive as a normal human being, he could have just asked her what she wanted to eat before taking her to a restaurant.

Because I also happen to have a friend without a college degree who came to my place for dinner a few months ago. I made food that he was admittedly unfamiliar with, but he managed to eat it without having a nervous breakdown even though he didn’t spend his late teens comparing Virgil to Beyonce in a 3-page paper written at 2am the day it was due.

This story, where Brooks shows just how insufferable of an upper-class twit he is while pretending to care about a poor, is unintentionally representative of the entire column.

Brooks wants the rubes to rail against college prep classes and David Foster Wallace instead of demanding that millionaires and billionaires pay the same tax rates they were paying several decades ago for a reason – because he doesn’t want this problem to actually be addressed.

Second, he makes inequality seem like a really hard thing to address, something that no one – especially not the government – can change. If it’s all about cultural codes, as Brooks suggests, then can we really do anything about it?

Except fighting economic inequality is really simple: take money from the wealthiest and give it to everyone else. This is what food stamps and Obamacare did. This is what progressive income taxes do when used to fund services for the poor, the working class, and the middle class. It’s not complicated, it’s just that people like David Brooks hate the idea.

I mean, he gets a six-figure income for writing two terrible columns a week! How dare anyone try to take that money away from him to pay for a poor kid’s insulin!

Third, he associates political liberalism and urban living with being wealthy, which is a really old trick to take attention away from the fact that conservatives try to redistribute income upwards while the left tries to redistribute it downwards.

In reality, wealthier Americans are more conservative than others. It’s the middle-age, white, suburbanite lawyer who rages against Medicaid and “safe spaces” in the comments of your local paper, not the young unemployed feminist with a taste for exotic products like “tea.”

Oddly enough, Brooks never says whether his friend with Acute Sandwich Anxiety Disorder is poor, even though the column is supposedly about economic inequality. That really says it all.