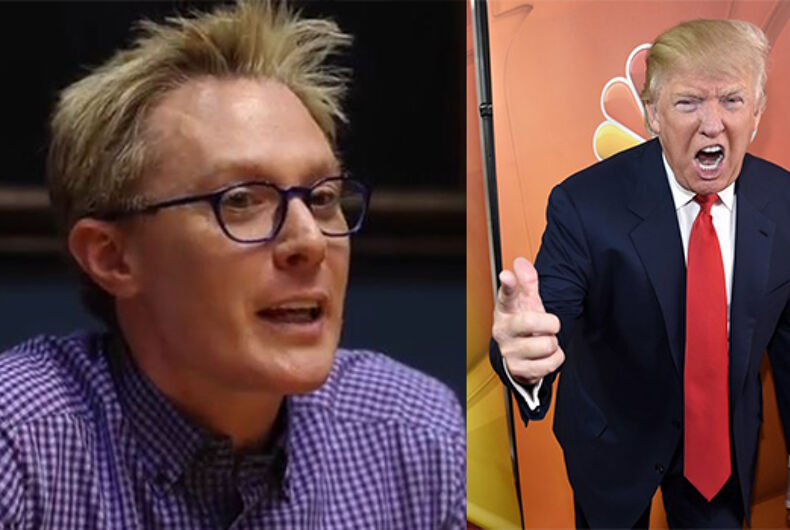 Clay Aiken is pulling back the curtain on how "The Apprentice" really worked.Photo: Aiken, Screenshot/News & Record; Trump, AP

President Donald Trump likes people to believe he is a strong leader, a competent and shrewd businessman trusted to make important decisions in key moments.

But according to Clay Aiken, who was the runner-up in the 5th season of The Celebrity Apprentice, he wasn’t the strong leader he was presented as, to the point of not even being aware of what was happening on his show. He claims Trump also wasn’t in charge of who would be on the receiving end of his famous “You’re fired” catchphrase.

Aiken made the comments while speaking with Raleigh’s News & Observer for their Under The Dome podcast.

“I see things now as he’s president that I can look back during Apprentice and say, ‘See, now that makes sense,'” Aiken said. “Trump didn’t decide who got fired on Apprentice…NBC made those decisions. We’d be sitting in a board room…and we’d do all the histrionics, and there used to be a little thing right on his desk that looked like a phone, and he pretended it was a phone, but it was actually a teleprompter where the producers were sending him notes, ‘Oh, such and such happened,’ you know, he didn’t know people were getting in fights during the week while we were doing these tasks. The producers did, and they’d send him notes and he’d say, ‘Oh, well, you two didn’t get along.’ Well you didn’t know that.”

Aiken added that sometimes Trump’s kids would come around to check up on them, but Trump was rarely seen and seemed content to just take cues from the producers and be the empty suit and figurehead of the show.

Aiken said he is convinced that Trump has a teleprompter on his desk in the Oval Office with advisers and aides telling him what is going on and what to do, just like the producers on The Apprentice did for him.

“I feel like half the time, his teleprompter has broken down as president, and he doesn’t know what’s going on,” said Aiken, who did also note that he thought Trump was likable in person.

“He probably is leading the country in the same way that he did Apprentice,” Aiken said laughing.

You can listen to the full interview below.

This matches what Tony Schwartz, the ghostwriter and credited co-author of Trump’s most famous book The Art of the Deal, had to say about him.

Schwartz claims Trump provided no assistance in writing The Art of the Deal, which, along with The Apprentice, helped cement the vision of Trump as the keen deal making genius he wants everyone to believe he is and always was, despite the corporate bankruptcies and many missteps that litter his career.

Schwartz presents a man who is not interested in the details, with no attention span. The only way he managed to get the book written, he has said, was by listening in on Trump’s phone calls, with Trump’s knowledge and permission, as well as carving out a space to be a bit free and loose with the truth.

The picture they paint is one recognizable to anyone watching the Trump administration.

Trump has said he has no need for press briefings, even though intelligence agencies were told to keep them brief, showing once again his inability to pay attention to anything that is too complicated and not directly about him.

His approval rating numbers suggest the mask is beginning to slip, and voters may be catching on. That said, considering the current state of the Democrats, combined with the obvious plan to disenfranchise voters in the upcoming elections already well underway, you discount Donald Trump at your own risk.