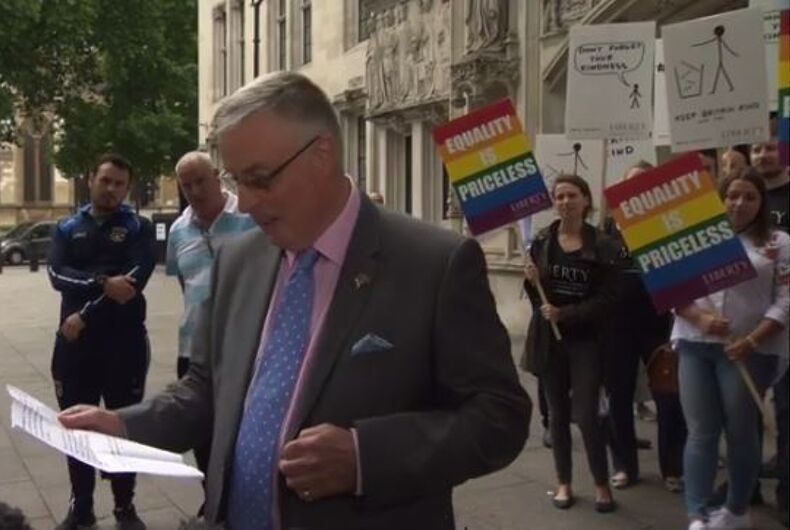 John Walker speaks to press after the Supreme Court ruled in his favor. Photo: Screenshot/BBC

A gay British retiree has won a legal battle to secure the same occupational pension rights for his husband that a wife would enjoy.

Five judges at the Supreme Court, Britain’s highest court, ruled that if John Walker died, his husband would be entitled to a spouse’s pension, provided they stay married.

The 66-year-old launched a discrimination lawsuit when the company he worked for said it would not pay out spouse benefits because his pension plan predated 2005, when gay civil partnerships became legally recognized.

The Court of Appeal ruled against Walker in 2015, but the Supreme Court overturned that decision Wednesday. The decision means that Walker’s partner will be entitled to spousal benefits of around 45,000 pounds ($57,800) a year — instead of about 1,000 pounds a year.

“I’m absolutely thrilled at today’s ruling, which is a victory for basic fairness and decency,” Walker told reporters. “Finally, this absurd injustice has been consigned to the history books and my husband and I can now get on with enjoying the rest of our lives together. But it is to our government’s great shame that it has taken so many years, huge amounts of taxpayers’ money, and the UK’s highest court to drag them into the 21st century. In the years since we started this legal challenge, how many people have spent their final days uncertain about whether their loved one would be looked after?”

“What I would like from Theresa May and her ministers today, is a formal commitment that this change will stay on the statue books after Brexit,” he added.

A similar battle over what rights same-sex married couples are entitled to is playing out in the United States.

So-called “religious freedom” laws are being increasingly looked to by conservative lawmakers as a way to offer a license to discriminate against same-sex couples, despite the U.S. Supreme Court ruling legalizing marriage equality nationwide specifically stating that rights must be provided equally to all married couples.