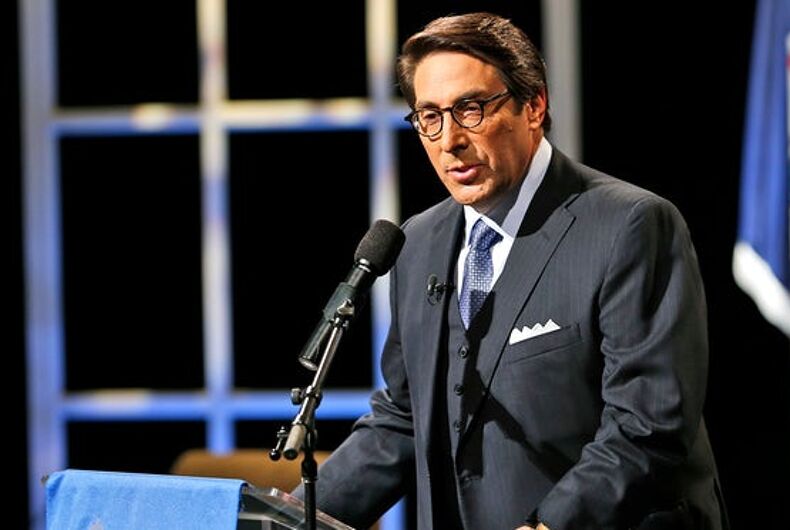 Trump's attorney Jay Sekulow approved a plan to shake down poor and old people for money to keep himself and his family well-heeled. Photo: Steve Helber/AP

As we recently reported, President Donald Trump’s latest hire in his team of attorneys defending him in Russiagate, Jay Sekulow has an extensive anti-LGBTQ, and anti-abortion background. He has also amassed quite a fortune for himself and his family, in part by shaking down the poor and elderly during the worst days of the financial crisis.

Sekulow heads up two Christian conservative nonprofits: The American Center for Law & Justice (ACLJ) and sister group Christian Advocates Serving Evangelism (CASE). As The Guardian reports, telemarketers for CASE, under Sekulow’s direction used scare tactics, with wild claims like abortion centers were going to be opening in middle schools and high schools as part of Obamacare, were asking the unemployed, the impoverished, and retirees living on fixed incomes to dig deep to give a “sacrificial gift of even $20 within the next three weeks.”

Turns out, much of that money was going to bankroll Sekulow and his family’s lavish lifestyle:

For years, the nonprofits have made a notable amount of payments to Sekulow and his family, which were first reported by Law.com. Since 2000, a law firm co-owned by Sekulow, the Constitutional Litigation and Advocacy Group, has been paid more than $25m by the nonprofits for legal services. During the same period, Sekulow’s company Regency Productions, which produces his talk radio show, was paid $11.3m for production services.

Sekulow also personally received other compensation totalling $3.3m. Pam Sekulow, his wife, has been paid more than $1.2m in compensation for serving astreasurer and secretary of Case.

Sekulow’s brother, Gary, the chief operating officer of the nonprofits, has been paid $9.2m in salary and benefits by them since 2000…

Meanwhile, a company run by Gary’s wife, Kim Sekulow, has received $6.2m since 2000 in fees for media production services and for the lease of a private jet, which it owned jointly with Jay Sekulow’s company Regency Productions. The jet was made available for the use of Jay and Pam Sekulow, according to corporate filings.

Jay’s two sons, and Gary’s son and daughter, have also shared at least $1.7m in compensation for work done for the nonprofits since 2000.

Attorneys and other experts in the nonprofit field said this risked violating a federal law against nonprofits paying excessive benefits to the people who run them, as this looks to be the very definition of excessive.

If nothing else, it raises serious questions about Sekulow’s motivations for the work he does, and the practices he is willing to implement to gain wealth.

“This is all highly unusual, and it gives an appearance of conflicts of interest that any nonprofit should want to avoid,” said Daniel Borochoff, the president of CharityWatch, a group that monitors nonprofits. CharityWatch has given Sekulow’s groups a C+ rating. He added that the two groups should be merged to avoid confusion.

“I can’t imagine this situation being acceptable,” said Arthur Rieman, managing attorney at Law Firm for Nonprofits. “That kind of money is practically unheard of in the nonprofit world, and these kinds of transactions I could never justify.”

Sekulow’s new client also has experience dipping his hand into his charity’s cookie jar to benefit himself.

Trump has used money from his nonprofit to purchase paintings of himself, a signed football helmet, and to pay off legal settlements stemming from his for-profit businesses.

Germany will vote on marriage equality on Friday