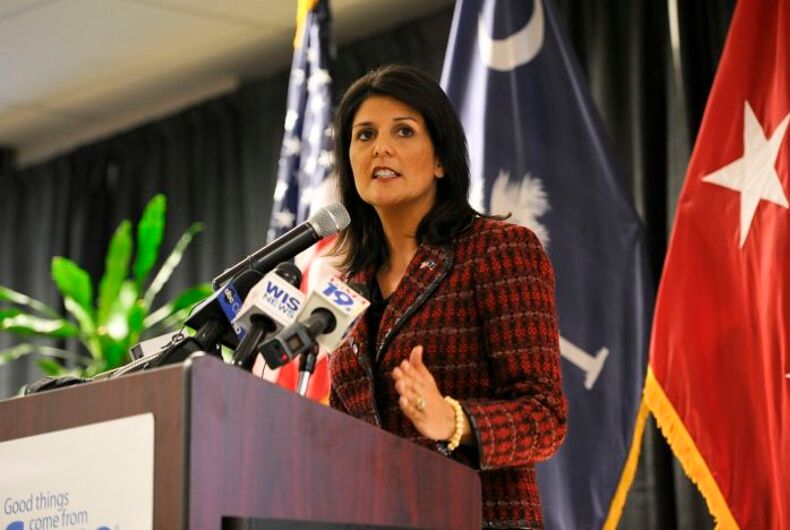 UN ambassador and former South Carolina governor Nikki Haley took to Twitter to say that she was booed at a New York City restaurant during the Pride parade.

Haley wrote that patrons said “hateful things” and she used the hashtag #HateNeverWins, which is ironic considering her current boss stood out in the Republican primary because of his hatefulness, which ultimately led him to victory. Not only does hate sometimes win, it’s been great for her career.

We,incl my son, were booed by patrons saying hateful things as we left lunch @ Pride Parade.Our country is better than this. #HateNeverWins

She has not said which restaurant this was or mentioned any other details of the incident. She also didn’t explain how someone can attend a pride parade by going to a restaurant.

Nikki Haley does not have a good record on LGBT issues. As governor of South Carolina, Haley opposed the Obama Administration’s attempt to protect the rights of transgender students, saying that Barack Obama was “imposing a one-size-fits-all policy from Washington.” Her attorney general filed a brief in federal court “to reject the federal government’s legal authority,” as South Carolina is wont to do from time to time.

In 2013, Haley went to court to keep South Carolina from having to recognize same-sex marriages performed in other states. She said, “The citizens of South Carolina spoke … they spoke something that I, too, believe, which is marriage should between a man and a woman.”

In her response to Obama’s 2016 State of the Union address, Haley made a vague reference to respecting “differences in modern families,” which she immediately followed with, “But we would also insist on respect for religious liberty as a cornerstone of our democracy.”

And while she did release a statement in April condemning detention sites where gay and bisexual men have been tortured in Chechnya, the Trump Administration hasn’t done anything else on the issue, even while France’s and Germany’s leaders have pressed Russian president Vladimir Putin for an investigation and a stop to the violence. It also says something that a person who has access to the most powerful people in the United States is only willing to condemn homophobia in other countries.

She also works for Donald Trump, and, no, she did not need the job to keep food on the table. She made a choice to work for someone whose political career was started when he accused the first African American president of being a Kenyan usurper.

Another person who was at the restaurant disagreed with her account.

NIkki- I was there at that restaurant. We treated you with respect. You should not malign the #LGBT community by the actions of a few.

Either way, it appears that Haley was able to escape the restaurant unscathed. Here she is later in an empty street with no rainbows anywhere “taking on” Pride.

Fun hanging out with this group today as we took on the Pride Parade in NYC. #SCTakesOnNYC #TeamHaleyUN #BooedButSmiling

Check out photos from Pride parades this weekend