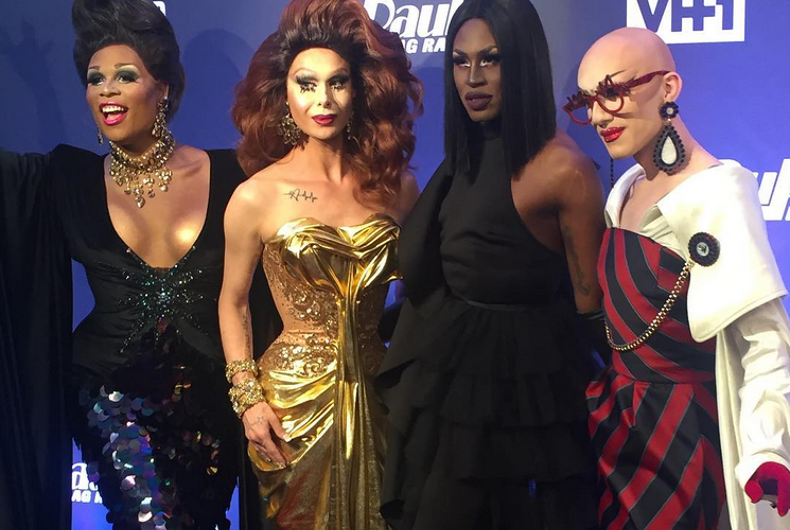 Well, my prediction about who was going to win season 9 of RuPaul’s Drag Race was wrong.

In my defense, the format of the final episode was different from the previous few seasons. Instead of some interviews, some jokes, some performances, and then Ru naming the winner from the finalists, they set up a lip sync tournament that pitted the four finalists against each other in two pairs of two, with the winners competing against each other.

Which can still be as arbitrary as “RuPaul names the winner,” since unless someone completely bombs a lip sync or undeniably nails it, there’s a lot of wiggle-room for a judge here.

Anyway, Peppermint and Trinity Taylor faced off first, lip syncing to Britney Spears’s “Stronger.” Trinity’s performance was energetic but rather banal: point, point, step, step, drop the the floor, shake the wig. She took off her skirt a little into the song to reveal the tightness of her famous tuck, a reference I don’t think most of the audience understood but cheered because everyone loves a reveal.

Peppermint moved less and gave more face, and her lip sync was so on-point that she even did the two claps in the chorus that I never heard in all the times I listened to that song. And her reveal was exciting: her awkward-looking skirt became a gown and her wig came off showing off another hairstyle that was beneath it.

In round two, Shea Couleé was completely out-shined by Sasha Velour as they lip synced to Whitney Houston’s “So Emotional.” Shea knew the lyrics and danced, but her moves weren’t amazing even though she is a talented dancer. I don’t think she got the memo that this isn’t just another lipsynch.

Sasha gave an appropriately emotional lip sync for the song. She also tore the petals off a rose at the beginning of the song, pulled more petals out of her gloves, and then took off her wig to shower herself with so many red petals. Yes, it’s a gimmick, but it’s a new gimmick, it was a beautiful way to make this lip sync more memorable, and the rest of her performance sold it.

Peppermint and Sasha moved on to the final round, lip syncing to Whitney Houston’s “It’s not Right, but it’s OK.” (Again with the Whitney, Ru?)

Peppermint wore a busy pastel outfit: sequins, rhinestones, and feathers on top, a plasticky short front/long back skirt and sparkly shoes on the bottom. Sasha’s look – a white skirt, transparent lace and shoulder spikes on top, a strange mask, and some amazing earring – just worked a lot better. It was Sasha and it skirted the line between edgy and ethereal. The part of the mask that covered her mouth came off right at the beginning of the song, a nod to Valentina’s epic loss earlier in the season.

Both are talented performers. Sasha’s performance was more dramatic. Still, it was close, Sasha won, and I’ll choose to believe it was because of those earrings.

Overall, this is a much more exciting way to end the season than in previous seasons, although it does downplay the importance of consistent performance all season.

So… who was ROBBED of the win? Who did you want to see get the crown?