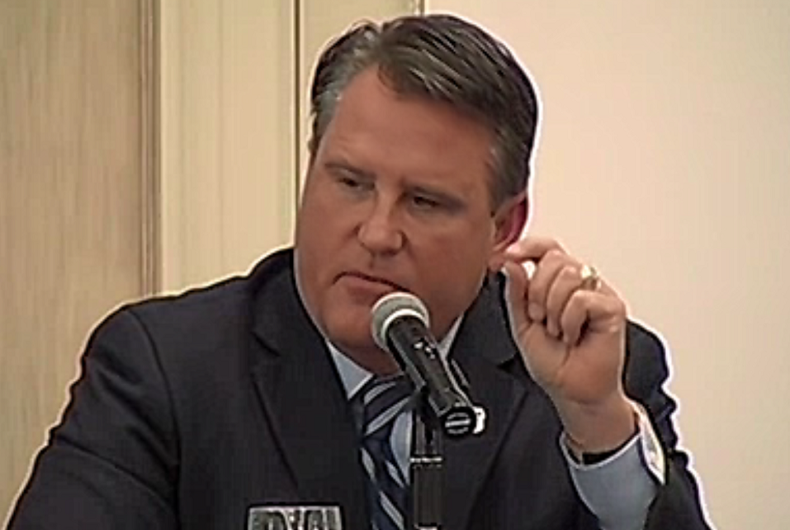 A candidate for lieutenant governor in Virginia sent a homophobic flyer out in an effort to win the Republican primary race.

In a flyer sent out by state senator Bryce Reeves, he lists reasons why rival state senator Jill Vogel should not win. One is that she “voted to approve the first openly gay judge in Virginia and only Republican to vote for special rights for gays and transgenders.”

The flyer refers to Vogel’s vote to confirm Tracy Thorne-Begland, who is gay, as a Richmond judge. Vogel voted with the majority of the state senate while Reeves abstained. Vogel said that she voted for Thorne-Begland because of his “exceptional qualifications.”

Reeves’s campaign put out a statement to defend the flyer that doesn’t really address what’s in it. “My criticism of Ms. Vogel is that she voted to put a liberal on the court,” the statement said.

It’s times like these that it’s important to remember that Republicans are fundamentally cowardly people. There’s a stereotype that Republicans are brave about their personal convictions, that at least they fight for what they believe in. I’ve even heard people on the left parrot this line.

And here, just as an example, is a Republican who couldn’t even defend (or retract) an argument that he clearly made, hoping, I suppose, that no one will look back at that original flyer.

It’s like when a little kid gets caught doing something wrong and their first thought is to lie about it, no matter how transparent their lie is.

That said, it is a sign of some kind of progress that even the homophobic candidate in a Republican primary in Virginia feels a need to lie about his homophobia when confronted about it.