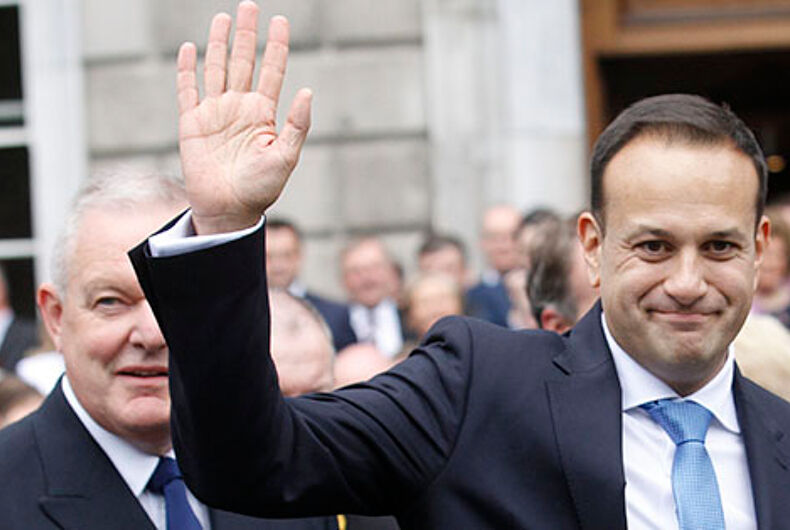 Leo Varadkar made history Wednesday as he was formally elected Ireland’s new Taoiseach — Irish for prime minister. Among the milestones he represents for his country: he is the first out gay premier, the first of both Irish and Indian heritage and the youngest prime minister ever to hold the office.

His relatives in Maharashtra, India, where his father was born, plan to celebrate the momentous occasion, according to NDTV.

“Our joy is boundless. But we have not made any formal celebration plans yet. But all relatives shall gather at our home this evening,” cousin Shubhada Varadkar told IANS on Wednesday morning.

Another cousin, Dipti Bhosale, said she was busy contacting all relatives of the joint family in Mumbai to join the festivities at the Borivali home which Varadkar visited in 2011 as a member of the parliament, or Dáil Éireann.

“Enda Kenny’s leadership enabled me to become an equal citizen in my own country two short years ago and to aspire to hold this office, an aspiration I once thought was beyond my reach, at least if I chose to be myself,” Varadkar said. He is a political conservative, but pledged to avoid partisanship.

“As the country’s youngest holder of this office, he speaks for a new generation of Irish women and Irish men,” Kenny told parliament, as he nominated his successor.  Varadkar, he said “represents a modern, diverse and inclusive Ireland and speaks for them like no other.”

Ireland has gone through rapid and significant social changes in just one generation, decriminalizing homosexuality in 1993 and legalizing divorce two years later. Abortion remains illegal except to save the life of the person who is pregnant.

Varadkar takes the reins 10 years to the day he took his seat in Ireland’s Parliament, a member of the center-right party when he was just 17. Already his opponents are warning that the former health, tourism and social protection minister has plans to move the government further to the right.

He has pledged to modify the debt reduction target so that it is less austere than the one set by Kenny’s government last year, and plans to lobby the European Union to give it the freedom to apply more funding to sorely needed infrastructure projects.

Varadkar wants the U.K.-controlled region of Northern Ireland to remain in the E.U., easing economic and border security concerns over Brexit, which he has said appears more likely following last week’s British election. Border crossings and trade problems vanished nearly 20 years ago when the British and Irish governments joined the E.U. and shared its open market. Brexit could mean a return of “The Troubles” if those conflicts were to resume.

Another unknown is how Ireland will work with the yet-to-be formalised coalition arrangement between the ruling Conservative party in London and the staunchly conservative Democratic Unionist Party of Northern Ireland, which opposes legal abortion and same-sex marriage.

How many shootings will it take before real gun control comes to America?