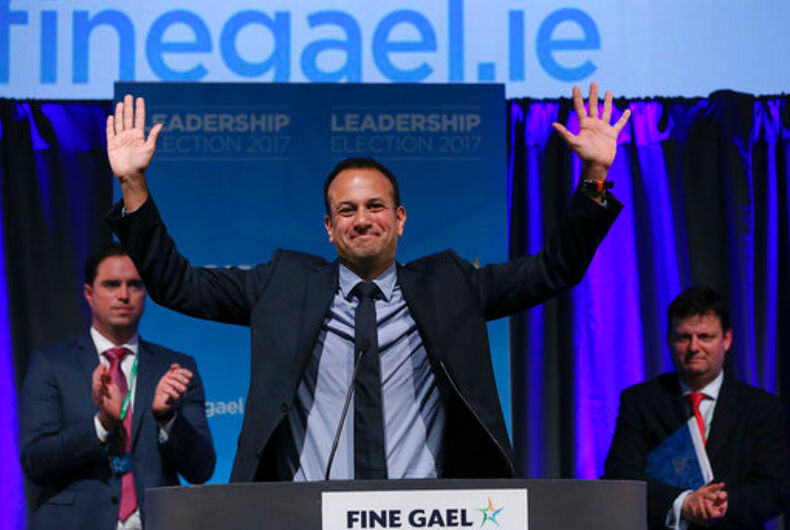 Leo Varadkar celebrates as he is named as Ireland's next prime minister, in the Mansion House in Dublin, Friday, June 2, 2017. Ireland's governing Fine Gael party has elected Leo Varadkar, the gay son of an Indian immigrant, as its new leader and the country's likely next prime minister. Varadkar defeated rival Simon Coveney in a contest to replace Enda Kenny, who resigned last month. Photo: Brian Lawless/PA via AP

Ireland’s governing Fine Gael party on Friday elected Leo Varadkar, the gay son of an Indian immigrant, as its new leader and the country’s likely next prime minister.

“If my election as leader of Fine Gael today has shown anything, it is that prejudice has no hold on this republic,” Varadkar said after his victory was announced in Dublin.

Coveney won the votes of a majority of party members, but Varadkar was backed by most lawmakers and local representatives to give him victory under the center-right party’s electoral college system.

He is highly likely to become prime minister in Ireland’s coalition government, although not immediately. Kenny will remain in place for a couple more weeks while Varadkar holds talks with other parties and independents propping up the Fine Gael-led government.

His confirmation as Taoiseach — Ireland’s prime minister — would come when the lower house of parliament resumes after a break on June 13.

At 38, Varadkar would be Ireland’s youngest prime minister, as well as the first from an ethnic-minority background and the first openly gay leader.

Varadkar was born in Dublin in 1979, the son of an Indian doctor and an Irish nurse. He came out publicly as gay in the run-up to a 2015 referendum that legalized same-sex marriage in Ireland.

If confirmed as prime minister, Varadkar will lead a country still emerging from the shadow of the 2008 global financial crisis, which hit the debt-fueled “Celtic Tiger” economy particularly hard.

He also will have to steer Ireland during complex divorce negotiations between Britain and the EU. Brexit has major implications for Ireland, the only EU country to share a land border with the United Kingdom.

Varadkar said he was “aware of the enormous challenges ahead. I’m ready for those challenges, as are we as a party.”

Trump doesn’t even know what Christianity is