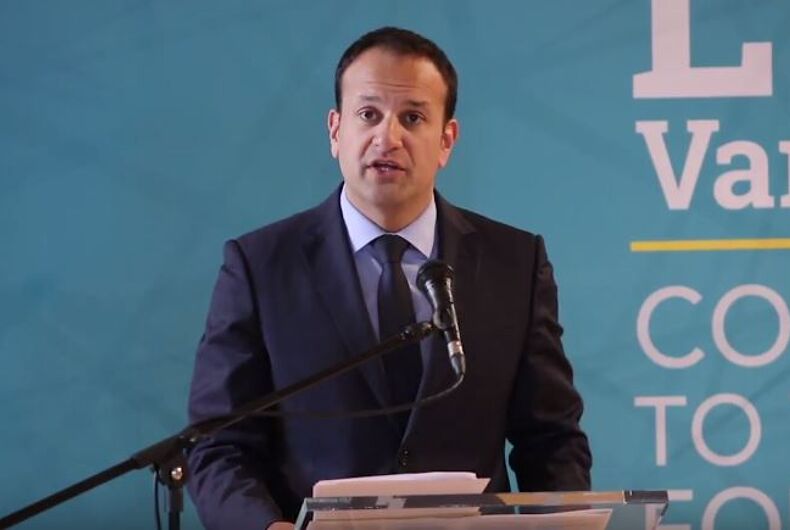 Varadkar, 38, currently serving as Minister for Social Protection, came out in an interview in a radio interview in 2015. He is facing off against Housing Minister Simon Coveney to replace Prime Minister Enda Kenny, who announced he was stepping down earlier this year after 15 years leading the country.

“It’s started really well and I’m really humbled at the level of support I have received from my colleagues, but I’m not counting my chickens,” he told Sky News. “I’m really looking forward to the hustings (meetings with constituents) and the debates.”

During the country’s same-sex marriage debate in 2015, Varadkar made an impassioned plea for equality under the law. In the end, Ireland did legalize gay marriage.

“This isn’t a bill about gay marriage, it’s about equal marriage,” he said. “It’s not about weakening one of the strongest institutions in society, it’s about strengthening it, and making it inclusive, and for everyone. It’s about removing the sense of shame, and isolation, and humiliation from many who feel excluded. It lets them know that Ireland is a country which believes in equality before the law for all its citizens.”

Varadkar relaxed Ireland’s ban on men who have sex with men donating blood last year, in his role as health minister.

The election is due to take place June 2, with Ireland’s parliament set to vote in the new leader as prime minister a few days later.

‘Hope will never be silent:’ Remembering the real Harvey Milk on his birthday