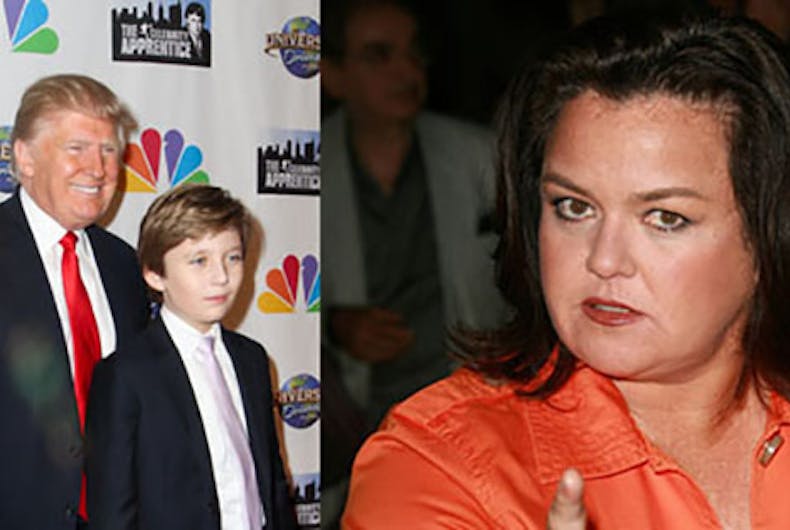 A tweet by a conservative television journalist triggered Rosie O’Donnell to do something that got her in hot water once before: drag President Donald Trump’s youngest son, Barron, into their longstanding feud.

It cited an unverified and unattributed report by TMZ that the 11-year-old was watching television when he saw the gory image that cost comic Kathy Griffin her CNN gig — her posing holding a faux severed head, made to look like Trump’s.

TMZ reported the boy mistook the “joke” for the real thing, and thought his father had been beheaded.

Barron was in front of the TV watching a show when the news came on and he saw the bloody, beheaded image. We’re told he panicked and screamed, “Mommy, Mommy!”

O’Donnell replied to the tweet by Liz Wheeler of One America News and tagged the president’s oldest son, Donald Trump, Jr. as well as Griffin. She not only questioned what the boy was watching but brought up the murder of two Good Samaritans in Portland, Oregon that the president has not commented on except for one tweet on the White House @POTUS account.

-was he watching TMZ? do u think he saw anything about these 2 heroic men who died defending young girls? hatred promoted by his father?#USA pic.twitter.com/ss2kWJjGiA

The simmering feud between Trump and O’Donnell goes back years, and the president recently reignited the fuse with a tweet directed at the comic, and citing her call for the firing of FBI director James Comey, after Trump did in fact fire him.

We finally agree on something Rosie. https://t.co/BSP5F3PgbZ

Reaction has been swift to condemn O’Donnell for citing Barron, just months after she apologized to First Lady Melania Trump for questioning whether the youngest Trump might be autistic.

But not all the responses have been critical of O’Donnell. One Rosie supporter shared this image featuring Barron’s stepbrothers, Donald Trump, Jr. and Eric Trump, hunting game.

My 5 year old niece is disturbed by this, my heart is broken. pic.twitter.com/BDnfTfbOfS