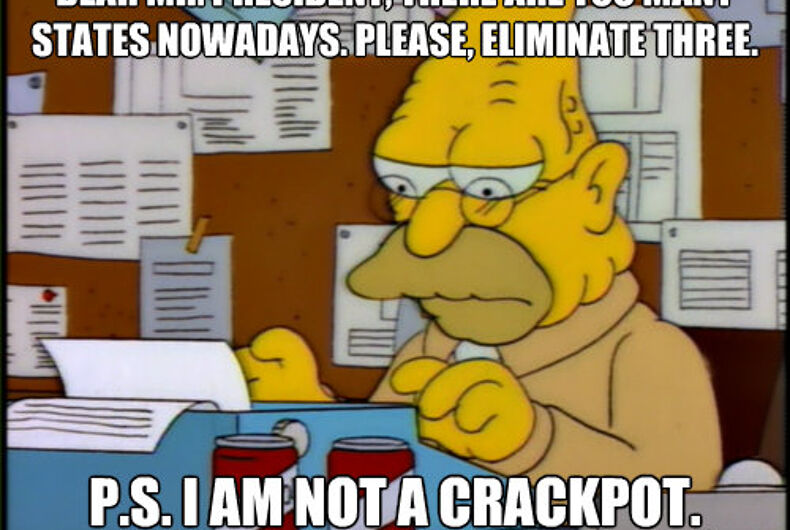 After a movie theater in Austin, Texas, announced a women-only showing of Wonder Woman, some men erupted in outrage.

But one in particular went far enough that he got a super-snarky response from Austin mayor Steve Adler.

The man, who identified himself as Richard A. Ameduri, does not live in Austin but was offended that he could not attend the women-only screening of Wonder Woman. He wrote an email to Adler last week saying that he hoped all men would join a “boycott” of Austin because of the “damage” the screening has done to “the city’s image.”

He accused women of valuing make-up so that they can “pretend that you are greater than you actually are.” Women “pretend not to know that only men serve in combat,” not because that’s the current reality, but because women “are content to have an easier ride.”

Ameduri also disparaged women’s sports and women inventors, and he tried to insult the city of Austin by pointing out that a mass shooter was once from that city. He promised he would never forget the mass shooter.

Before closing, Ameduri stressed, “I do not hate women.”

Mayor Adler responded several days later with sarcasm, “to alert you that your email account has been hacked by an unfortunate and unusually hostile individual.” “Please remedy your account’s security right away, lest this person’s uninformed and sexist rantings give you a bad name. After all, we men have to look out for each other!”

Adler went on to highlight some achievements of women inventors and to point out that woman can serve in combat. He also defended the movie theater’s decision to take advantage of “a business opportunity.”

He closed by saying that everyone is welcome in Austin, even the person “who wrote that email whose views are an embarrassment to modernity, decency, and common sense.”

Both emails are below.

I hope every man will boycott Austin and do what he can to diminish Austin and to cause damage to the city’s image. The theater that pandered to the sexism typical of women will, I hope, regret it’s decision. The notion of a woman hero is a fine example of women’s eagerness to accept the appearance of achievement without actual achievement. Women learn from an early age to value make-up, that it’s OK to pretend that you are greater than you actually are. Women pretend they do not know that only men serve in combat because they are content to have an easier ride. Women gladly accept gold medals at the Olympics for coming in 10th and competing only against the second class of athletes. Name something invented by a woman! Achievements by the second rate gender pale in comparison to virtually everything great in human history was accomplished by men, not women. If Austin does not host a men only counter event, I will never visit Austin and will welcome it’s deteriorati on. And I will not forget that Austin is best known for Charles Whitman. Does Austin stand for gender equality or for kissing up to women? Don’t bother to respond. I already know the answer. I do not hate women. I hate their rampant hypocrisy and the hypocrisy of the “women’s movement.” Women do not want gender equality; they want more for women. Don’t bother to respond because I am sure your cowardice will generate nothing worth reading.

I am writing to alert you that your email account has been hacked by an unfortunate and unusually hostile individual. Please remedy your account’s security right away, lest this person’s uninformed and sexist rantings give you a bad name. After all, we men have to look out for each other!

Can you imagine if someone thought that you didn’t know women could serve in our combat units now without exclusion? What if someone thought you didn’t know that women invented medical syringes, life rafts, fire escapes, central and solar heating, a war-time communications system for radio-controlling torpedoes that laid the technological foundations for everything from Wi-Fi to GPS, and beer? And I hesitate to imagine how embarrassed you’d be if someone thought you were upset that a private business was realizing a business opportunity by reserving one screening this weekend for women to see a superhero movie.

You and I are serious men of substance with little time for the delicate sensitivities displayed by the pitiful creature who maligned your good name and sterling character by writing that abysmal email. I trust the news that your email account has been hacked does not cause you undue alarm and wish you well in securing your account. And in the future, should your travels take you to Austin, please know that everyone is welcome here, even people like those who wrote that email whose views are an embarrassment to modernity, decency, and common sense.

Will Wisconsin be the next state to protect transgender people’s civil rights?