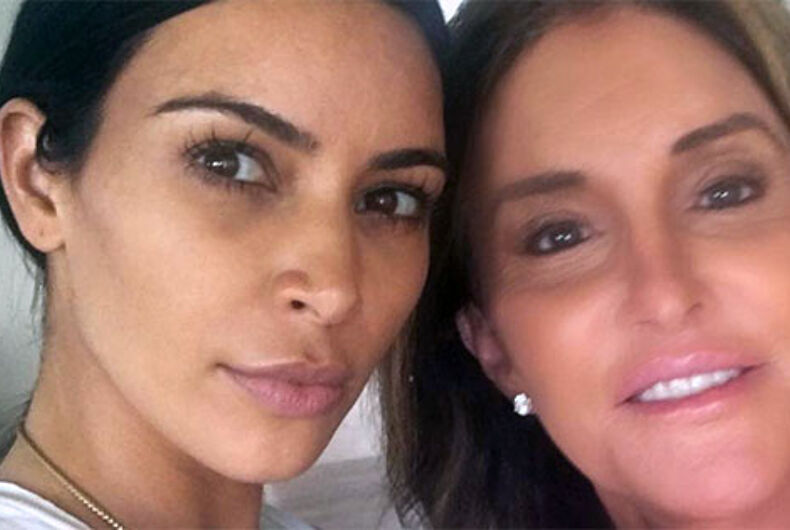 “She just literally started three families with three different people and fucked everyone over,” Kim Kardashian West says of her transgender father, in a preview clip from the next episode of their struggling reality TV series.

On Sunday’s show, Kardashian and her stepsister, supermodel Kendall Jenner, chat with their mother, Kris Jenner, about Caitlyn Jenner’s much-hyped, tell-all memoir, The Secrets of My Life.

And the upshot, reported People magazine, is that they both think their mom got a raw deal from her ex.

Kris Jenner has not been silent about her feelings about Cait’s memoir, and according to Kardashian has stopped talking to her over it.

But in true Keeping Up With The Kardashian fashion, what she won’t say to her ex’s face, she’s more than happy to say to E!’s ever-present cameras.

“She never paid a bill from 1972,” says Kris Jenner, now 61. “She didn’t know how much a gardener was, and in the book writes: ‘Well, Kris didn’t need me anymore. All the checks for Keeping Up with the Kardashians, they all went to Kris.’ Went to Kris?! How about it went to the mortgage, and the insurance, and education?”

“You start talking about how I was hoarding money when we didn’t even have it?” she rants.

In another clip, her 21-year-old daughter with Jenner, Kendall, reveals her belief that her father has convinced herself the story she’s telling the world is the truth.

Is all this just another ploy to publicize Jenner’s memoir, which has tumbled off the bestseller lists? Or does the clan aim to boost ratings of Keeping Up with the Kardashians by keying into the backlash against the transgender former Olympian?

Judge for yourself on the series airing Sundays (9 p.m. ET) on E!

Life
Caitlyn Jenner, E!, I Am Cait, Keeping Up With The Kardashians, Kendall Jenner, Kim Kardashian, Kris Jenner, Secrets of My Life

Paris Accord, Pride Month proves yet again, don’t hang your hopes on Ivanka

Questions arise over treatment of transgender inmate in North Carolina