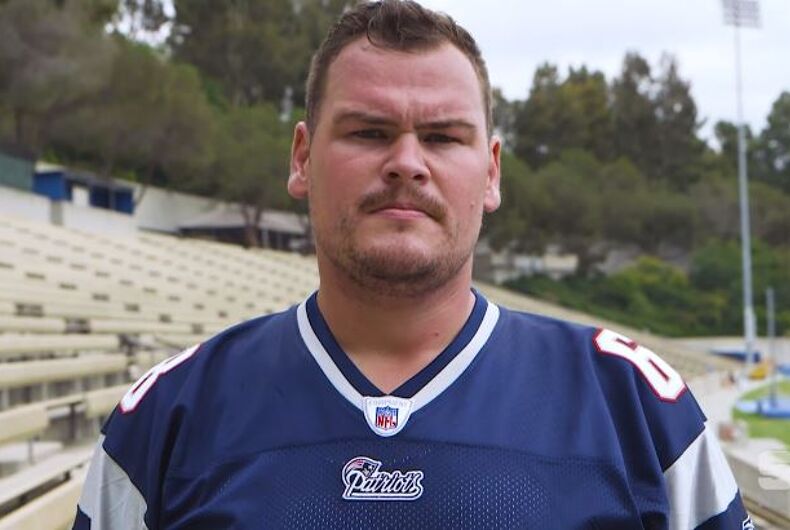 Ryan O'Callaghan played for both the New England Patriots and the Kansas City Chiefs.

Former NFL lineman Ryan O’Callaghan, who played for the New England Patriots and Kansas City Chiefs, has come out of the closet in a moving interview for Outsports.

O’Callaghan, who spent five years in the NFL, never expected to have a post-football life. He was deeply closeted, unable to imagine living as an openly gay man. Instead of coming out or continuing to live with the pain of life in the closet, he planned to commit suicide after he retired from the game.

“If it wasn’t for some good friends, a couple of good dogs, I’d be gone,” he added. “I’m just glad there were people that were looking out for me, pushing me in the right direction to actually get help.”

He also struggled with drug addiction.

He credits a small group of people within the Chiefs organization with helping lead him to a better place, including the team’s general manager, Scott Pioli. He reassured O’Callaghan that he still had Pioli’s support, who shared that he had many gay people in his life and had previously counseled other gay NFL players.

Related: These NFL teams just became the first to sponsor a pride celebration

O’Callaghan said he hopes his coming out will show others that it is safe for them to do so as well, including some more recognizable names.

Defensive end Michael Sam was drafted into the NFL, by the St. Louis Rams, as an openly gay man, but was cut before the season began.

O’Callaghan recalled growing up in Redding, California, in an environment where gay people were not readily accepted.

“If you’re a gay kid and you hear someone you love say ‘fag,’ it makes you think that in their eyes you’re just a fag too,” he said. “That got to me a lot.”

But when he went home to come out to his family, he was pleasantly surprised.

“All the people I was most concerned about were fine. It was so much easier and better than I ever imagined,” he recalled.

He said he thinks the NFL is ready for an openly gay player.

“I think teams are ready. Guys just have to understand he’s gay. It doesn’t mean he wants to date you, he just wants to be your teammate,” he said. “It’s not a big deal, it’s really not.”

He added that he hopes his story will lead to “someone else much higher profile coming out.”

He said he is in a much better place since coming out.