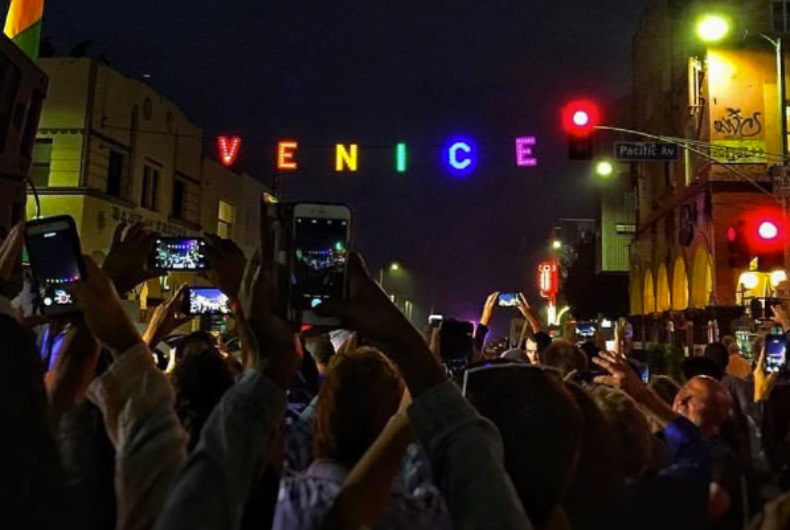 Professional sports teams have been slower than other parts of society to welcome the LGBTQ community. But the NFL gained some serious yardage last week when Venice Pride kicked off with not one, but two NFL teams sponsoring the event.

“It’s great for Venice, for the Rams’ organization and for the LGBT community,” Venice Pride E.D. Grant Turck told The Los Angeles Blade. “Hopefully this is the beginning of even bolder outreach efforts to our diverse community.”

The L.A. Rams and the L.A. Chargers each sponsored a letter in the iconic rainbow-lit Venice sign for Friday’s opening celebration. It’s reportedly the first time an NLF team has sponsored an LGBTQ Pride event.

Technically, the Rams got there first. It’s not surprising, consider that they were also the first NFL team to sign an openly gay player — Michael Sam.

“We are proud to work with Venice Pride and to stand in alignment with the LGBT community that is such an important part of the fabric of Los Angeles,” Rams VP of Community Affairs Molly Higgins said in a release. “Inclusion has always been a valued part of our organization and we see this as a unique way to publicly celebrate the diversity that makes this community so special.”

The Chargers echoed that sentiment.

“It’s about the fabric of Los Angeles,” Chargers Special Adviser Jeffrey Pollack told CBS L.A. “And as we are saying hello to the L.A. market and getting ready for this season, a big part of what we are doing is trying to connect with the community, learn about the community — and that means all of the community.”

After all, LGBTQ people are football fans too.

“It meant a lot to the organizers — it meant a lot to me personally — to see both NFL teams stepping up,” said openly gay Councilman Mike Bonin said. “It shows that they’re good citizens of L.A.”