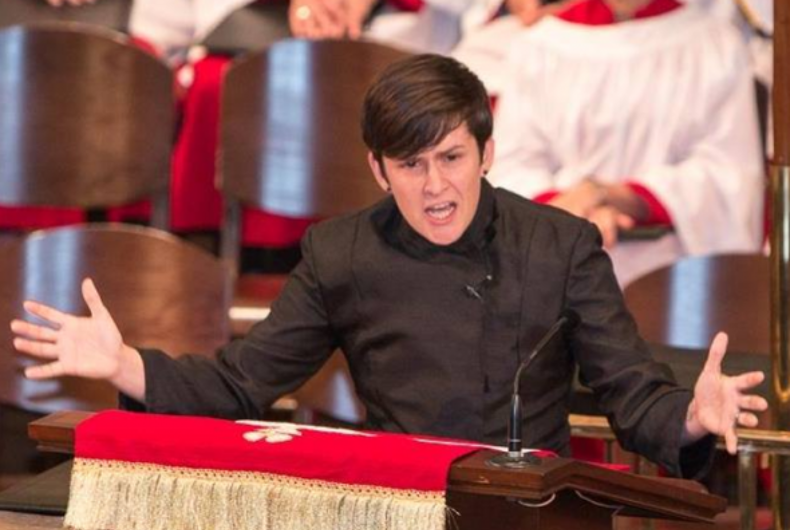 M Barclay identifies as neither male nor female, and last Sunday they became possibly the first non-binary person ordained in the United Methodist Church with the words “Send them now to proclaim the good news of Jesus Christ, to announce the reign of God, and to equip the church for ministry,” instead of “Send him now” or “Send her now.”

Barclay is originally from a conservative community in Florida and entered the ministry identifying as a straight woman. They came out as lesbian while studying theology in Texas.

“I really struggled for the next year about whether I was going to stay in the church at all. I struggled with how much harm the church had done, not only to LGBT people but to other marginalized people. I wasn’t sure I wanted to be a part of that,” Barclay told the Washington Post.

Officially, clergy in the United Methodist Church must be either celibate or in heterosexual marriage, but there have been gay clergy before in the church as well as same-sex marriages.

Barclay got a job as a youth director at a church in Austin after seminary, and they pursued ordination even knowing the church’s stance on LGBT issues. “I understand the rules of the church. But here’s the truth: I’m queer, and I’m called to this. I tried to walk away.”

They were surprised that they weren’t rejected immediately but instead got to the first series of interviews. That, though, didn’t lead to ordination, since Barclay was in a relationship with a woman. “There was a conversation of 400 clergy in Texas about whether or not they could prove I was having sex. It was terrible. It was terrible.”

They moved to Chicago and eventually met with a local church board that approved their candidacy for clergy, leading up to the commission this past Sunday.

“Every step of the way, I still wasn’t sure if this would ever happen,” they said. “Even until the day of the service on Sunday. I was thinking, ‘Is somebody going to run into the room and find a way to put a stop to it?’”

Since Barclay isn’t in a conjugal relationship right now, the church’s rules on homosexuality have been skirted. The United Methodist Church does not have clear rules about transgender and gender non-conforming clergy members.

There are members of the church who oppose ordination for transgender people. This is a topic that Barclay often gets asked about.

“How do I theologically and scripturally advocate for trans people? I’m invited a lot to preach on that question,” Barclay said.

Still, they feel a calling to this work. “A visibly trans person who is an extension of the church — queer and trans people need to see that. They need to see themselves reflected in the life of faith,” Barclay said.

Trump’s Appoints Another Homophobe Just in Time for Pride Month