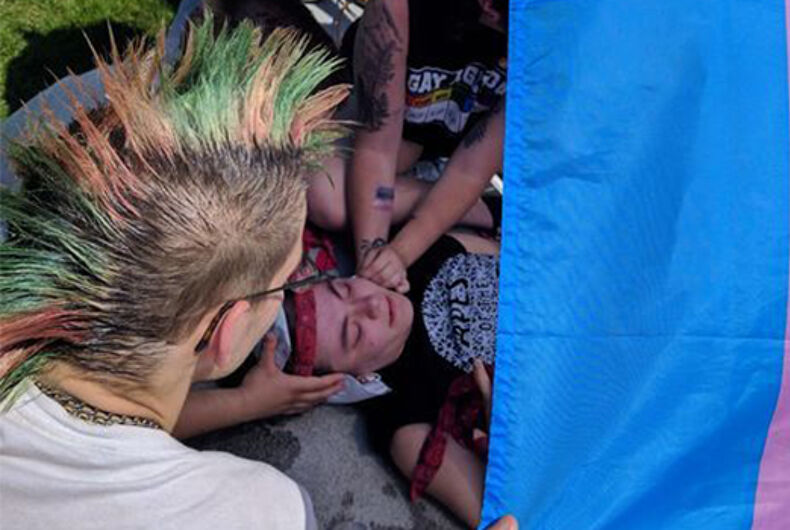 Cas Dell is attended to after an altercation with a protester at the Equality March in Harrisburg, PA. Photo: Tara Stark

A man attending Sunday’s Equality March in Harrisburg, Pennsylvania was allegedly assaulted by an anti-LGBTQ protester who showed up with an offensive sign and refused to leave.

Tara Stark, an attendant at the march and volunteer at the LGBT Center of Central PA, told the York Dispatch that the man, whose sign read in part, “3rd world refugees brought drug resistant AIDS to the US last year,” stood on the steps of the state Capitol building near LGBTQ rights demonstrators.

A video of the incident shows the man standing by the participants with his sign, which someone attempts to cover with their own.

At this point, the man begins to walk away, perhaps to find a spot where his sign won’t be covered up, before an individual identified by Stark as Cas Dell attempts to rip it out of his hands.

A scuffle ensues, at which time it becomes difficult to tell exactly what is occurring.

The York Dispatch reports that Dell fell off a ledge of stairs, and according to Stark, the protester punched Dell several times. Stark said the man also pulled on Dell’s hair and piercings.

Police then escort the protester away, as people tended to Dell.

“He just started attacking her,” one individual can be heard saying toward the end of the video.

State Capitol Police spokesman Troy Thompson confirmed that an incident occurred and said police are investigating, but that they will have no further comment unless charges are brought.

Dell could not be reached for comment by the York Dispatch. LGBTQ Nation has also attempted to contact Dell, so far unsuccessfully. We will update if more information becomes available.