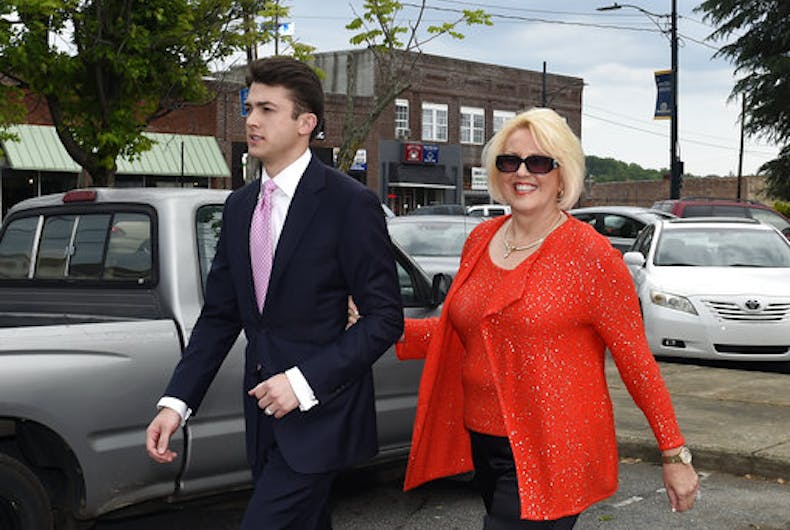 In this photo taken May 19, 2017, Brooke Covington, a member of the Word of Faith Fellowship church in Spindle, N.C., leaves a hearing at Rutherford County Courthouse accompanied by attorney, Joshua Valentine, in Rutherfordton, N.C. Covington and other church members are accused of kidnapping and assaulting Matthew Fenner, a former church member, because he is gay. Photo: AP Photo/Kathy Kmonicek

One of five people charged with trying to beat “homosexual demons” out of a fellow church member in North Carolina testified for prosecutors on Friday, saying she threw the first slap after their minister began the attack.

Sarah Anderson took the stand despite defense objections in the trial of Word of Faith minister Brooke Covington. Anderson accused her of starting the confrontation with Matthew Fenner after a January 2013 service at the Spindale church.

She testified that Covington started pushing Fenner’s chest and screaming “Open your heart!” Anderson said she then slapped Fenner in the face, and about 30 church members then joined in, beating, screaming and choking the man for about two hours.

During opening statements the day before, defense attorney David Teddy said Word of Faith members did not attack Fenner at all. He said they gave him routine prayer that lasted no longer than 15 to 20 minutes, and that Fenner hugged everyone when it was over.

Anderson, 30, left the church in February 2016 after accusing Covington and other church leaders of abusing her 1-year-old son. She said she has made no deal with prosecutors, and gave no reason on the stand why she decided to incriminate herself. She answered their questions in a matter-of-fact, unemotional tone.

Anderson was still testifying for the prosecution when the judge took a break for lunch Friday.

Covington, 58, faces up to two years in prison if convicted. She is the first of the five church members charged to face trial. Each defendant will be tried separately.

Anderson said church leaders made her a mentor for the 23-year-old Fenner. She testified that in that role, she went to Covington, telling the minister that she thought Fenner had experienced “some kind of sexual sin or thought.”

Anderson said Covington then confronted Fenner and became the ringleader in the attack. Even after Fenner confessed during the beating to having had homosexual thoughts in a dream, Covington urged them to continue, she testified.

“Brooke asked him, ‘did your body manifest?’ which means, did you have an erection? And he said ‘yes’,” Anderson said.

Covington’s attorney tried to keep her from taking the stand, telling the judge that Anderson didn’t understand she was exposing herself to legal consequences. But Anderson was allowed to testify after talking to her lawyers, both in the criminal case and a child custody case.

Teddy concentrated on Anderson’s testimony that she went to Covington about her concerns with Fenner and was the first to get violent.

“You were the primary instigator,” he said.

“No,” she whispered from the stand. She said other church members pushed to confront Fenner.

Teddy also asked witnesses if Fenner ever asked anyone attacking him to stop. Church member Danielle Cordes responded that it wouldn’t have been a smart move if he had.

“If he would have said stop it would have gotten ten times worse,” Cordes testified Friday.

Anderson testified that church leaders, including two working prosecutors at the time, met with the people who participated in the attack after Fenner pressed charges. She said then-assistant District Attorneys Frank Webster and Chris Back coached them to tell investigators that nothing violent happened that night.

The Associated Press reported about that meeting earlier this year. Church members who spoke to the AP also said the lawyers wanted them to accuse Fenner of lying. Days after the AP report, District Attorney David Learner asked the State Bureau of Investigation for a criminal review of Webster and Beck, and said the two men no longer worked for his office.

As part of an ongoing, two-year investigation into abuse of Word of Faith Fellowship congregants by church leaders, the AP interviewed four former church members who say they witnessed Fenner being attacked.

Based on interviews with 43 former members, documents and recordings, the AP also reported in February that Word of Faith Fellowship congregants were regularly punched, smacked, choked, slammed to the floor or thrown through walls in a violent form of deliverance meant to “purify” sinners by beating out devils.

The church has scores of strict rules to control congregants’ lives, including whether they can marry or have children. Failure to comply often triggers a humiliating rebuke from the pulpit or, worse, physical punishment, according to numerous former members interviewed by AP. Members can’t watch television, go to the movies, read newspapers or eat in restaurants that play music or serve alcohol. If church leaders believe a congregant has sexual or dirty thoughts, they can be accused of being “unclean” and be punished, the former members said.

Fenner said he joined the sect with his mother and brother in 2010. He fled after he said he was attacked to expel “homosexual demons.”

The AP’s investigation also revealed that congregants were ordered by church leaders to lie to authorities investigating reports of abuse and that two assistant district attorneys and a veteran social worker were among those who coached congregants and their children on what to say to investigators. After the AP report, the prosecutors, including one who is a son-in-law of a church founder, left their jobs, and the social worker resigned.

The sect was founded in 1979 by Jane Whaley, a former math teacher, and her husband, Sam, a former used car salesman. Under Jane Whaley’s leadership, Word of Faith Fellowship grew from a handful of followers to a 750-member congregation in North Carolina, and another nearly 2,000 members in churches in Brazil and Ghana. It also has affiliations in other countries.