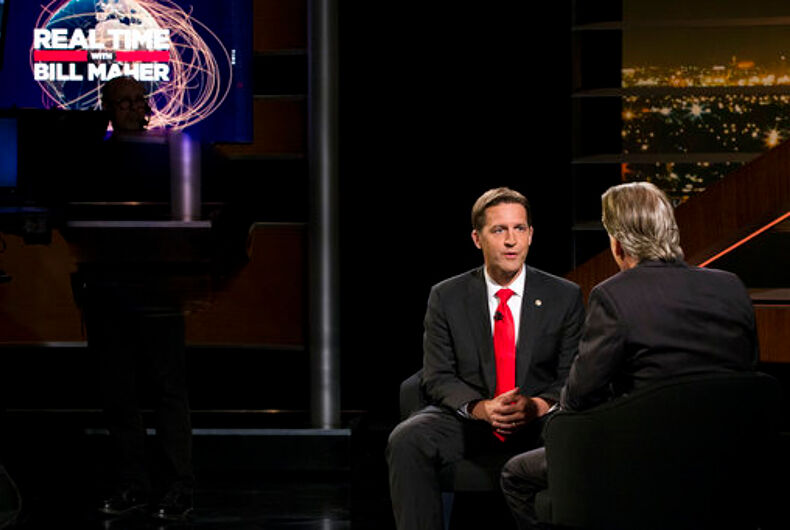 In this photo provided by HBO, Bill Maher, right, speaks with Sen. Ben Sasse, R-Neb, during a segment of his "Real Time with Bill Maher," Friday, June 2, 2017. Maher is facing criticism for his use of a racial slur during a discussion with the Republican senator on his HBO talk show Friday night. Photo: Janet Van Ham/HBO via AP

Bill Maher apologized Saturday for using a racial slur to describe himself as a house slave during a live segment for his HBO talk show.

Maher’s comment during his discussion with Sen. Ben Sasse, R-Nebraska, was quickly and broadly criticized after it aired on the comedian’s Real Time with Bill Maher show Friday night.

MAHER: Adults dress up for Halloween, they don’t do that in Nebraska?

SASSE: It’s frowned upon. We don’t do that quite as much.

MAHER: I gotta get to Nebraska more.

SASSE: You’re welcome. We’d love to have you work in the fields with us.

HBO said the remark was “completely inexcusable and tasteless” and the segment would not be re-aired.

“Friday nights are always my worst night of sleep because I’m up reflecting on the things I should or shouldn’t have said on my live show,” Maher said in a statement Saturday. “Last night was a particularly long night as I regret the word I used in the banter of a live moment. The word was offensive and I regret saying it and am very sorry.”

During Maher’s discussion with Sasse, the senator joked that he would like to have Maher visit Nebraska and work in the fields. The comedian responded by using a slur in a joke that he was a house slave.

The comedian immediately waved off audience groans. “It’s a joke,” he said on the show.

Activists including the Rev. Al Sharpton quickly criticized Maher, and it remained a top-ranked topic on Twitter on Saturday.

“Just because Bill Maher is a liberal and our friend, you don’t give him a pass,” Sharpton said on his radio show Saturday. “It’s wrong and we’re calling him out on it. You cannot allow folk to act like there’s anything funny in that context about using that word.”

Sasse wrote on Twitter on Saturday morning that he wished he’d challenged Maher for his use of the slur immediately.

“I’m a 1st Amendment absolutist. Comedians get latitude to cross hard lines,” Sasse wrote in a series of posts. “But free speech comes with a responsibility to speak up when folks use that word. Me just cringing last night wasn’t good enough. Here’s what I wish I’d been quick enough to say in the moment: ‘Hold up, why would you think it’s OK to use that word?'”