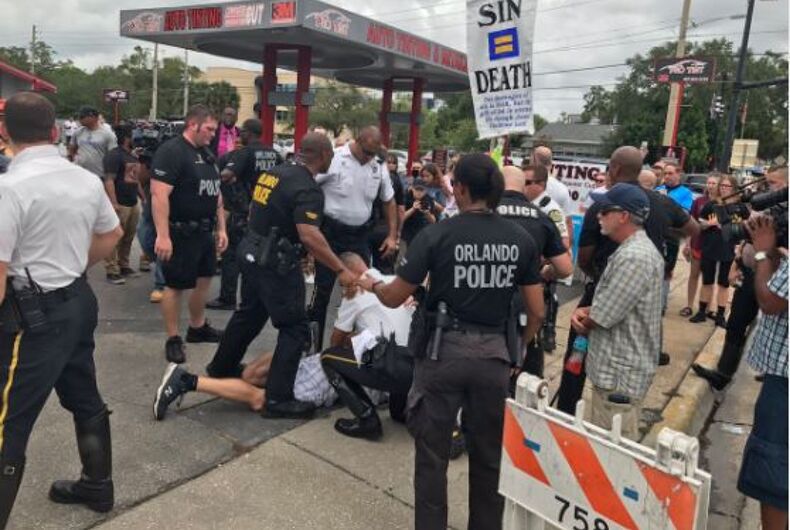 An antigay street preacher is taken to the ground by police at the Pulse nightclub on the one year anniversary of the shooting that claimed the lives of 49 people.Photo: Twitter/Michael Lopardi

As the LGBTQ community gathered at the Pulse nightclub in Orlando on the one year anniversary of the mass shooting there that claimed the lives of 49 people and injured dozens more, they were, sadly, not alone.

Also at the site of the shooting were Christian street preachers, spreading fear and hatred. They held disgusting signs, like one claiming gay people burn in hell, citing as their moral compass a text that failed to stick the landing on the moral quandary, “Is it okay to own slaves?”

According to ABC affiliate WFTV, local officials and community members had just finished a remembrance ceremony when police took one of three preachers to the ground and placed him in handcuffs, as the crowd changed, “Love over hate!”

Police have yet to say why they arrested the man.

LGBTQ Nation has reached out to the Orlando Police Department for further information. We will update this article if more details come to light.

BREAKING: One protester handcuffed after showing up at #pulse. People attending ceremony cheer as he is placed in opd car. @WESH pic.twitter.com/cTrcMRlRLV

Will the queer resistance be sponsored by big banks?