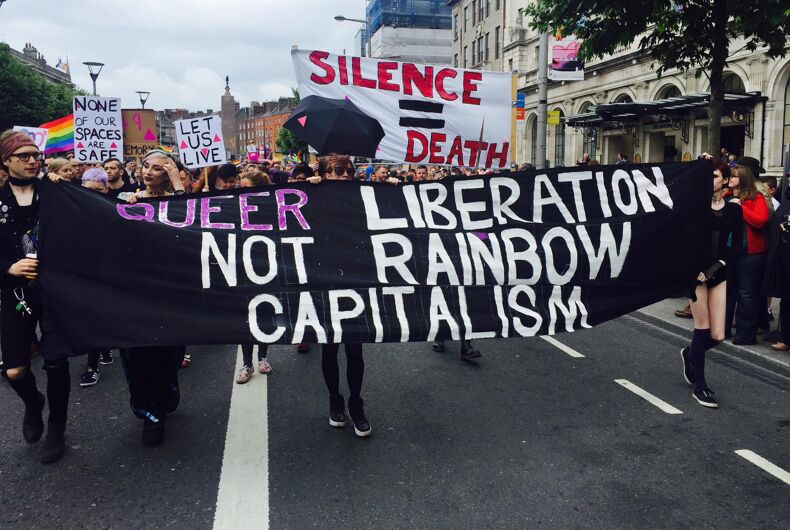 The first “Pride” was a riot. There were no corporate sponsors and police were delivering blows, not handing out candy to families along a parade route. In those early years after Stonewall, Pride was about resistance.

Today, the LGBTQ community has a lot to celebrate, and Pride celebrations reflect that. But as the corporate world gets increasingly hip to the fact that LGBTQ-inclusion is good for business, who and what our parades and festivals celebrate has shifted.

We asked LGBTQ Nation readers, “Do you think Pride has become too commercial?”

For many, the answer was a resounding, “Yes.”

“While I understand it needs some source of funding, the level of commercialism is pretty extreme. The first “Pride” parade was 1970 in New York , as a show of force and resistance to an oppressive government,”ロバート ライルズ  wrote. “I think a lot of the meaning of Pride has been cheapened, as few people today know much about why Pride is a thing, and I think commercialism has eroded some of the cultural and most of the historical qualities to it, making it just another festival.”

Others called it pink-washing.

“I don’t know about other cities, but Capital Pride in DC certainly is,” Allison Fischer said. “I mean, DEFENSE CONTRACTORS like Northrop Grumman and Lockheed have floats in the parade; it’s absolutely absurd, it’s pink-washing, and it’s a sellout to capitalist imperialism.”

Especially if the countries participating aren’t all that friendly to LGBTQ people in real life.

“When you get every other major bank showing up in rainbow tees but they do absolutely nothing for LGBTQ groups, GTFO,” Jordan Land  said. “Arguably, they actively harm queer communities by continuing to force people into the streets, banks in particular. I argue that any level of corporate interest in Pride is suspect, because it creates a positive feedback loop where cities charge more for organizers to become involved, corporations are the only ones who can fulfill those needs, cities increase because they can, and now the organizations who actually do good work can’t afford to be involved anymore.”

But it’s not just organizations who get priced out.

“I’m just tired of feeling left out because I live below the poverty line,” Joel Gillotti “Pride gear is always twice as expensive as comparable, non-rainbow stuff. All the shows, rallies cost money, and the door fee at clubs triples. Pride doesn’t mean anything if people are being left out just because they can’t afford it.”

As one reader noted, it’s not just Pride that’s become a commodity.

“I think it is too commercial. The sponsorships etc. are done to achieve brand loyalty among our community,” Todd Hebert wrote. “At the same time, the visible support is nice, and it needs to be funded somehow. So… the commercialisation of US is a double-edged sword. The hope is that it helps our community enough to be worth ‘selling out’ to the sponsors, so to speak.”

That’s why LGBTQ people need to smart about which companies they go to bed with.

“You need visibility, that’s what we are all after….we want to be seen. BUT there is a fine line. There are corporations that truly “support” the community and put their actions in the same place as their money….and there are the ones who are users and use the community for their own gain,” Kelly Wilson  wrote. “It’s up to us as a savvy community to know the difference and support the right places.”

Some readers acknowledged the commercialism, but said LGBTQ people should embrace it.

“Much like traditional holiday’s, it CAN be taken advantaged of for monetary gain..however..screw it!”Nic Kingan wrote. “Buy all the pride goodies and show off to the world!”

After all, there are perks.

“I think Pride has evolved as a resource, revenue source to help broader and longer term programs, spaces, and outreach that benefits the community on an ongoing basis. Part of that evolution had definitely made Pride more commercial,” Joshua Alan Snyder-Hill said. “As long as the organizers work hard to NEVER stop explaining prides origin then I am fine with businesses expressing their support for the community, especially if it benefits us.”

And some said that the corporate interest is a sign of our increasing equality.

“I think its great that our community is fully realized,” Michael Christopher  wrote. “It brings it into normal society and shows that we are like everyone else..we just love differently.”

No matter how you feel about the increasing commercialization of Pride, it’s a reality. And one that can be used for good.

“That’s the price we pay for wider acceptance. The fact that companies openly compete for our $$$ means we’re more a part of the mainstream. It’s what we wanted, right?” Steven J. Galvan  said. “I do have a fondness for the times when our struggle seemed more pure because we were outsiders. But we should take advantage of this influx of money by corporations to curry favor with us by addressing some crucial issues. Foremost in my mind, the issue of homeless gay youth. These are our kids and we need to do more.”

Even Mother Nature is celebrating pride this year