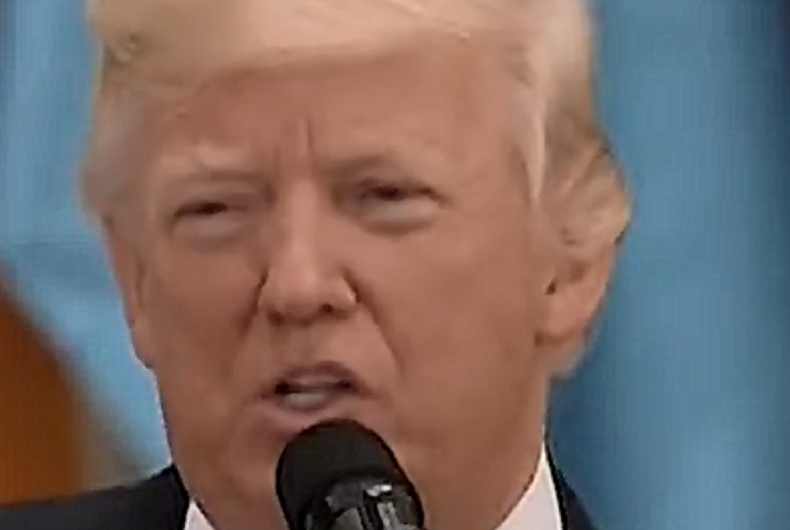 Donald Trump made a speech today in the city of Riyadh in Saudi Arabia, his first public address in a Muslim-majority nation, and he implied that the United States would continue its policy of largely ignoring human rights abuses.

“America is a sovereign nation, and our first priority is always the safety and security of our citizens,” he told the Arab Islamic American Summit, an annual meeting of leaders of 50 Muslim-majority nations. “We are not here to lecture. We are not here to tell other people how to live, what to do, who to be, or how to worship. Instead, we are here to offer partnership — based on shared interests and values — to pursue a better future for us all.”

Trump did mention a few oppressed groups when he was listing ways to combat extremism towards the end of his speech. “And it means standing together against the murder of innocent Muslims, the oppression of women, the persecution of Jews, and the slaughter of Christians.” He immediately moved on to another topic after that sentence.

Trump’s comments were generally less remarkable than his usual ad-libbed campaign speeches. He avoided more combative rhetoric that he has used in the past, like when he said “I think Islam hates us” and when he told Anderson Cooper that he thought the US was at war with Islam itself.

Trump also avoided the phrase “radical Islamic terrorism,” an expression that was very important to him when Obama was president.

Is President Obama going to finally mention the words radical Islamic terrorism? If he doesn't he should immediately resign in disgrace!

When will President Obama issue the words RADICAL ISLAMIC TERRORISM? He can't say it, and unless he will, the problem will not be solved!

Trump did, though, refer to extremists as “Islamist” at several points in his speech, and even strayed from prepared comments to say “the crisis of Islamic extremism…Islamic terror of all kinds.”

Overall, the speech comes off as a lecture, as Trump, who has done nothing to fight terrorism his whole life that did not involve Twitter, exhorted leaders – whose countries are the the primary victims of terrorism and who have been working for decades to stop terrorism – to fight terrorism.

Transgender voters being blocked from registering

1000 people participate in Pride in Romania