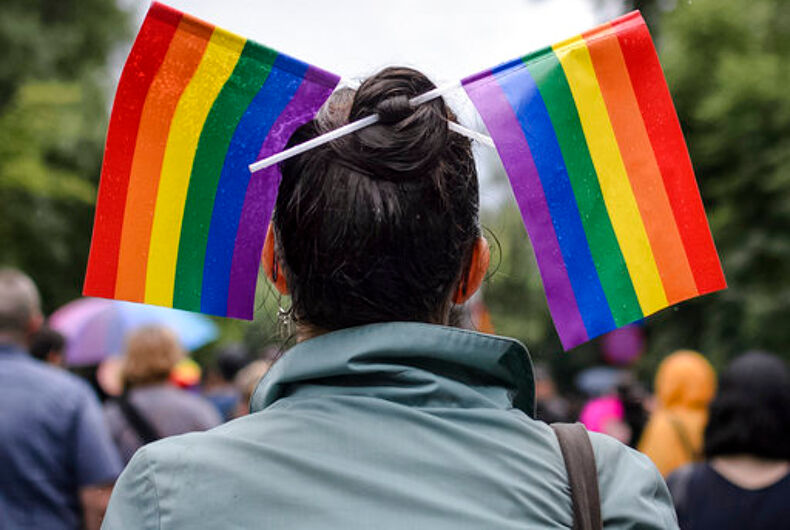 A woman with rainbow colored flags in her hair waits for the start of a gay pride parade in Bucharest, Romania, Saturday, May 20, 2017. Some 1,000 people have joined a gay pride march in the Romanian capital of Bucharest on Saturday, demanding greater rights amid government moves they say will curtail their human rights.Photo: AP Photo/Andreea Alexandru

Some 1,000 people joined a gay pride march in the Romanian capital of Bucharest on Saturday, demanding greater rights amid government moves they say will curtail their rights.

Some 30 ambassadors expressed support for the march and for protecting the rights of the LGBT community and U.S. Ambassador Hans G. Klemm was among those taking part, despite the pouring rain.

The gay pride march, now in its 13th year in Romania, comes after lawmakers approved an initiative that could amend Romania’s constitution to explicitly state that marriage is a union between a man and woman. The wording now is a union between “spouses.”

In a carnival atmosphere, participants carried rainbow flags and umbrellas and brought dogs and children as they walked down a tree-lined avenue.

Participants held a minute of silence as they passed the Russian Embassy in solidarity with gays in Chechnya, where dozens have been detained and tortured.

Earlier in the day, a few dozen anti-gay protesters staged a counter-march, saying they were opposed to adoptions by same-sex couples.

Patrick Braila, a movie director and gay rights’ activist, called for marchers to remember gays in Chechnya, and Romanians who had moved abroad due to discrimination. Romania decriminalized homosexuality in 2001.

Vlad Viski, chairman of the gay rights’ group MosaiQ, told The Associated Press that Romania must legalize civil partnerships in Romania “because gay couples are a reality.”

“They must be respected by the state, as they pay their taxes and therefore they must be treated as equal citizens,” he said.

Singer Florin Chechisan, 29, told the AP that attitudes had changed in Romania in recent years, “but too little.” He said he counted himself lucky because “my friends and family accept me.”

© 2017, Associated Press, All Rights Reserved.
This material may not be published, broadcast, rewritten, or redistributed.
LGBTQ Pride
Chechnya, Romania

Trump in Saudi Arabia speech: The US will not tell you “how to live”

Drama about ACT UP gets best reviews at Cannes Film Festival