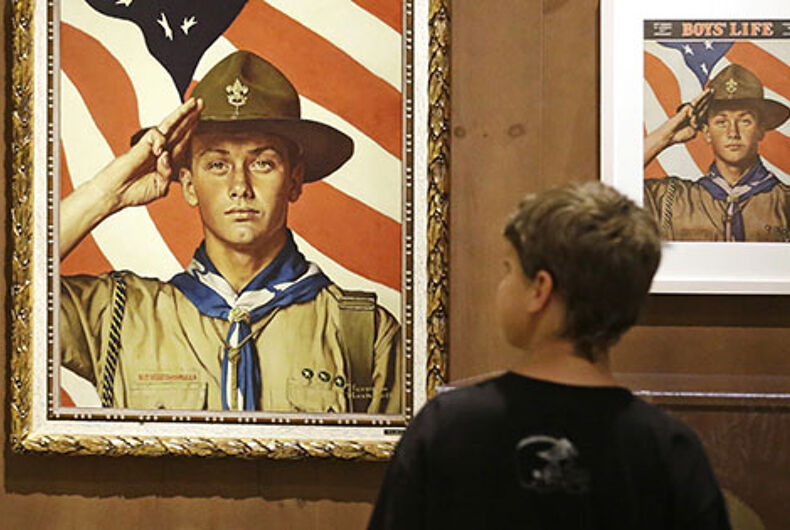 The Mormon church, the biggest sponsor of Boy Scout troops in the United States, announced Thursday it is pulling as many as 185,000 older youths from the organization as part of an effort to start its own scouting-like program.

The Church of Jesus Christ of Latter-day Saints said the move wasn’t triggered by the Boy Scouts of America’s decision in 2015 to allow gay troop leaders, since Mormon-sponsored troops have remained free to exclude such adults on religious grounds.

A separate question is whether the January decision by the BSA to allow transgender scouts was a factor. In February, the Mormons were said to be studying this policy shift. And since then, the National Organization for Women and others have called on the BSA to admit girls as well as transgender boys; the organization was reported to be studying that idea. There’s even a petition that’s drawn more than 7,500 signatures.

While not addressing the issue of trans boys, the church did directly respond to the question of girls in scouting in its FAQ post, “Is this a reaction to the news that the Boy Scouts of America is considering the inclusion of girls and young women in its programs?”

Church leaders learned just recently about the BSA’s intent to consider including girls and young women in Scouting. Our decision to end our participation in the Varsity and Venturing programs was made independent of this possibility and before that time. We anticipate our Cub Scout and Boy Scout units will continue as they are at present.

A spokesperson for the church told LGBTQ Nation its decision to quit the scouts has nothing to do with transgender boy scouts, and claimed its FAQ statement was not intended to deliberately misgender trans boy scouts, by calling them girls.

At least one leading Mormon scholar said that the Boy Scouts and the church have been diverging on values in recent years and that the policy on gays was likely another one of several contributing factors in the split.

Saying it wants a new, simplified program of its own that is more closely tailored to Mormon teenagers, the church announced that boys ages 14 to 18 will no longer participate in the Boy Scouts starting next year. The church said the decision will affect 185,000 teens, while the Boy Scouts put the number at 130,000.

The loss is only a fraction of the 2.3 million youths in the Boy Scouts of America, but the organization has been grappling with declining membership for years and has enjoyed an unusually close bond with the Mormon church for more than a century because of their shared values. Joining the Boy Scouts is practically automatic among Mormon boys.

Boy Scouts of America spokeswoman Effie Delimarkos said the organization is saddened by the decision but understands the church’s desire to customize a program.

About 280,000 Mormon boys ages 8 to 13 will remain in the Scouts while the church develops its own program, the Mormons said. The Boy Scouts estimated their number at 330,000. The church did not say when the younger boys will be withdrawn from the Boy Scouts.

Like other conservative faiths, the Mormon church opposes gay marriage and teaches that being in a homosexual relationship is a sin. The church initially said it was “deeply troubled” by the Boy Scouts’ policy change on gays but stayed with the organization after receiving assurances it could appoint troop leaders according to its own religious and moral values.