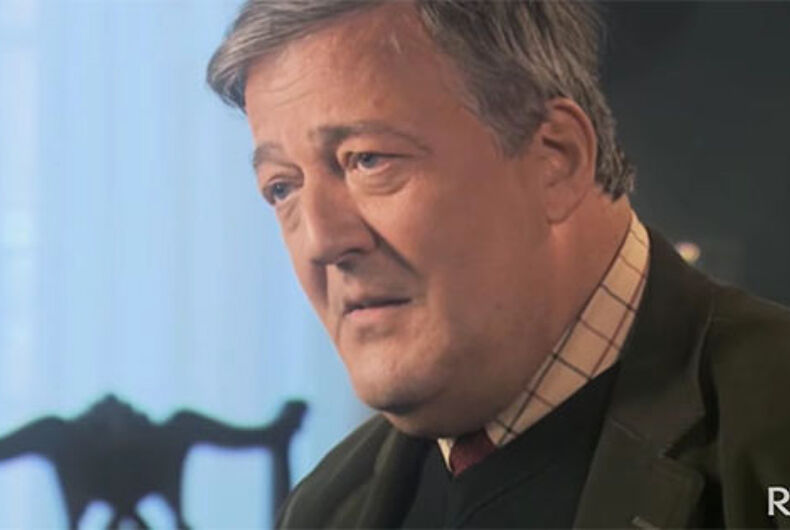 UPDATE: The investigation has been dropped after public outcry. Police say there was no injured party and the one man who complained says he did his “civic duty in reporting it. The guards did their duty in investigating it. I am satisfied with the result.”

A candid interview with British actor Stephen Fry on the subject of God is now the subject of a police investigation in an Irish town, all because one viewer — one out of more than 7 million — complained to the police that it violated the country’s law against blasphemy.

Police in Ennis, County Clare are launching a full investigation under the Defamation Act of 2009. A source tells an Irish newspaper it was “highly unlikely” the case will be prosecuted. But if it did lead to a trial and conviction — which has never happened before — Fry could face fines in excess of $27,000.

What’s interesting is that the man who filed the complaint told police he wasn’t at all offended, but he did feel as though what Fry said was a violation of the act.

In the 2015 interview that appeared on The Meaning of Life, a show on the RTE Irish television network, host Gay Byrne asked Fry what he’d say to God if he were to meet the supreme being worshipped by roughly 4 billion people on earth.

Why should I respect a capricious, mean minded, stupid God who creates a world which is so full of injustice and pain. That’s what I would say.

God was quite clearly a maniac. Utter maniac. Totally selfish. We have to spend our lives on our knees thanking him? What kind of God would do that?

Atheism is not just about not believing there is a god. But on the assumption there is one, what kind of God is he? It is perfectly apparent that he is monstrous, utterly monstrous and deserves no respect what so ever. The moment you banish him life becomes simpler, purer, clearer and much more worth living in my opinion.

When asked if he thinks he would be able to “get into heaven”, Fry retorts that he “wouldn’t want to”.

Right wing pundits: Queen Elizabeth is a lizard & Hillary is a dead cannibal