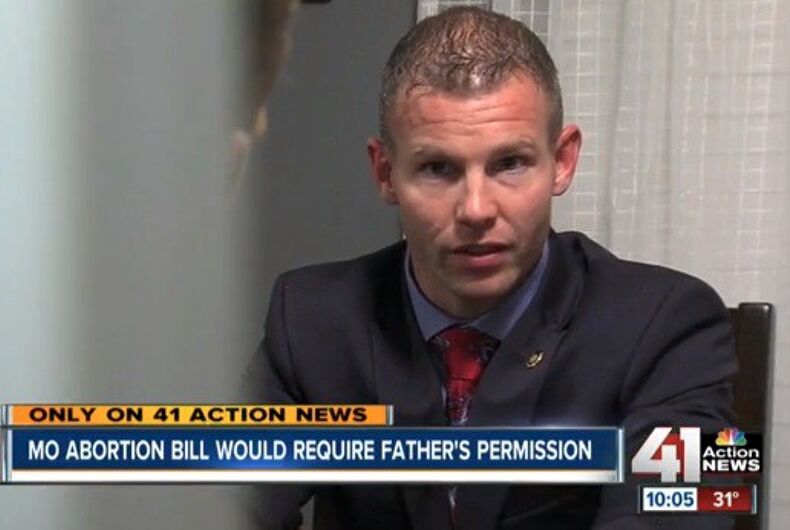 Rick Brattin in 2014 when he was more concerned about which rapes were legitimate than whether gay people are human.Photo: Screenshot/via ThinkProgress

The Missouri House was working on a bill that would roll back discrimination protections by making it harder to sue an employer. In this process, Representative Kevin Engler (R) offered an amendment that would have added sexual orientation and gender identity to the state’s anti-discrimination law. Currently, there is no law in Missouri banning discrimination against LGBTQ people in employment, housing, or public accommodations.

Representative Rick Brattin (R), arguing that it wouldthe amendment in order to protect the sacred religious practice of firing people you don’t like.

During his speech, he implied that gay people are not human beings. “When you look at the tenets of religion, of the Bible, of the Qu’ran, of other religions, there is a distinction between homosexuality and just being a human being.”

Engler withdrew the amendment because there weren’t enough votes for it.

This is not the first time Brattin has attracted national attention. In 2014, he filed a bill that would have required women seeking an abortion to get notarized consent from the man who impregnated them.

Brattin’s bill made an exception for “legitimate rape,” which he defended: “So you couldn’t just go and say, ‘Oh yeah, I was raped,’ and get an abortion. It has to be a legitimate rape… I’m just saying if there was a legitimate rape, you’re going to make a police report, just as if you were robbed

The 2017 bill to make discrimination easier, though, passed 98-30 as many Democrats refused to vote on it. The bill would make it harder for people to sue for discrimination, and it is being sponsored in the Missouri Senate by a state senator who is currently being sued for discrimination. Many Democrats did not vote so that they would not participate in a conflict of interest.

The state senator sponsoring the bill, Gary Romine (R), owns a rent-to-own business. The lawsuit against him alleges that a supervisor told an employee to “quit acting like a [racial epithet].” The lawsuit also says that the store had a map with predominantly African American neighborhoods labeled as “Do not rent to.”

The Democrats’ new CEO is a power lesbian