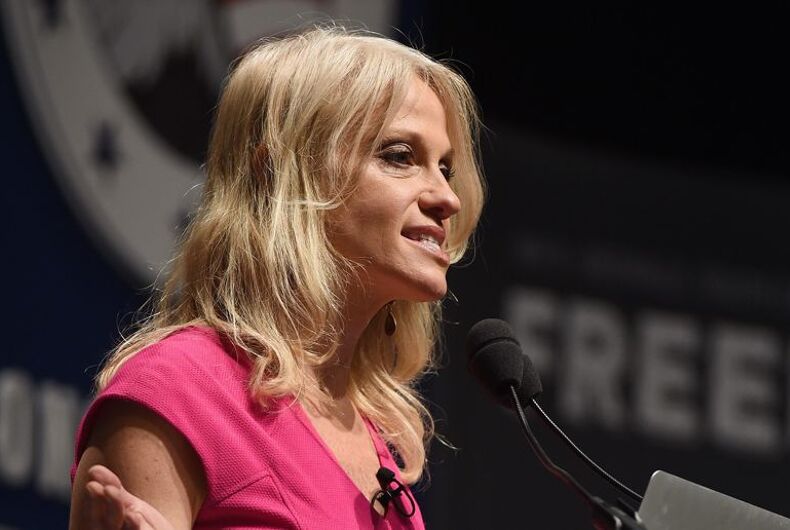 Kellyanne Conway is back in the public eye on the heels of FBI Director James Comey's firing.Photo: Associated Press

Kellyanne Conway is back in the spotlight, sticking up for President Trump amid the FBI Director James Comey firing scandal, through the eye rolls and draggings.

She will also soon be appearing at the Christian conservative Family Leadership Summit in Des Moines, Iowa, alongside anti-LGBTQ rights activists.

The July 15 event is hosted by The Family Leader, whose stated mission is to “Strengthen families, by inspiring Christ-like leadership in the home, the church, and the government.”

This year’s theme is “Principle over Politics.”

The group’s CEO and president, Bob Vander Plaats, pledged during a gubernatorial campaign that he would attempt to stop same-sex marriage in the state after the 2009 Supreme Court made it the law of the land nationwide.

Also speaking, alongside Conway, will be the Benham Brothers, who lost an HGTV show when their anti-LGBTQ views became widely known, and who advocated for North Carolina’s House Bill 2 (HB2); U.S. Sen. Joni Ernst, who has voted numerous times against same-sex marriage; and Pastor Jim Garlow, who once claimed the prayer gatherings he organized helped lead to the passage of California’s anti-same-sex amendment Proposition 8.

“It’s an honor to welcome to the 6th annual Summit the first woman credited with successfully running a presidential campaign,” Vander Plaats said in a statement. “Her experiences at the highest levels of leadership and government will be a valuable perspective for an audience committed to a vision for America as a nation that honors God and blesses people.”