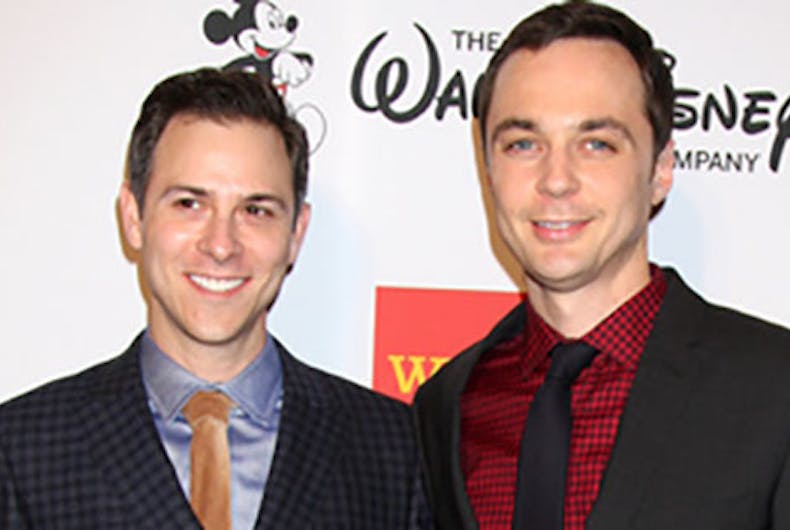 While TV viewers wait to see if Sheldon is getting married on Big Bang Theory after popping the question to Amy last week, fans of Jim Parsons are celebrating his real-life nuptials with longtime partner Todd Spiewak, as first reported by The Hollywood Reporter.

And what could be a better place to wed than New York City’s Rainbow Room, high atop Rockefeller Center Saturday night?

The boys changed for the reception, Jim into a red velvet tux and Todd into a white tux, each designed by Tom Ford.

Reception, first dance… (have to say thank you to #anniepsaltiras who was supposed to just be a guest but worked really hard to help us get the @tomford tuxes we loved so much AND she tied the bow ties of several guests that night. Annie is a champ and we love her ❤️) photos by @ambergressphotography (why can't I figure out how to tag @melissamcneeley and @doan_ly ??? Oh yeah, cuz I'm old. 👌)

No other details on the wedding but we do know the couple has been together 14 and a half years now, and marked their anniversary with a too-cute-for-words selfie on Instagram last November.

I met this guy (the one with the mic) 14 years ago today and it was the best thing that ever happened to me, no contest. One of his greatest gifts to me is that he no longer takes me to sing karaoke. Also, I believe this was a selfie with an actual camera, as our phones couldn't do that back then hahaha! #todd #anniversary ❤️

They revealed in their post that Jim considers it one of the greatest gifts Todd ever gave him the fact he stopped dragging him to sing karaoke, and remarked that they’ve been together longer than cellphone selfies have existed.

Congratulations to the happy couple!